How To Hire React Native Developers For a Business ? 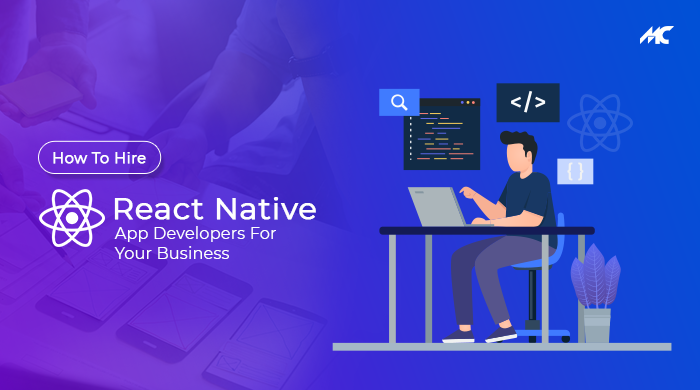 The most popular digital tool among internet users is an app. In today’s world, you’ll need an app or a website to buy anything from anywhere 24×7. We can call this era the rising world of Apps. In the end, all app types require an appropriate framework, and of these, React Native is the best. Thus, hiring React Native Developers is the greatest option to improve your company.

The React Native platform is a JavaScript framework designed for creating native apps, or mobile apps. They are natively adapted to the iOS and Android platforms.

Facebook’s React JavaScript library for online development is the basis of React Native for mobile app development. React Native makes it easier to develop multi-platform apps since most of the code can be shared across platforms. Thus, you can write iOS and Android apps simultaneously.

After knowing the basics of React Native App Development, we must go through the responsibilities of a RN Developer. Before starting to learn the hiring process, we will begin with their roles.

Here is a list of some basic React Native responsibilities.

Hiring Best React Native Developers: What to Look For & What Not!!

Also Read:
Why Should You Hire React Native Developers to Build Your App ?

React Native App Developer: Key Skills to Look Out For!

We have classified React Native Developers into three categories with special skills included for each of them. Before hiring one, look out for these hard skills in them.

You should think about a few things before hiring Junior React Native developers.

They might not have much or any work experience. They are recent grads or dropouts from high school.

A Junior Native React developer must have the skills mentioned below.

The framework for React Native is JS. You must look for a junior RN developer who is proficient in coding skills and abilities for JavaScript ES6 and more.

An RN junior developer must be well-versed in React Native framework. It is quite important that the RN developer is aware of the essential components namely APIs, & libraries.

Redux is a tool for managing states. React Native Developers can easily manage states of components that are shared among components with this library.

It is important for middle developers to have hands-on experience with hardware integration, including microphones, cameras, gyroscopes & GPS sensors.

Middle developers should have at least basic knowledge of databases, as well as React Native. Data caching should also be familiar to them.

In React Native, we can call the senior developer an expert. Experience at this level normally accounts for three years. They should not only have experience in designing React components, but also have excellent portfolios of React apps.

A Junior RN developer should be able to do the following:

Senior developers should have experience in multiple languages, including Swift, Objective-C, & Kotlin. With these languages, they can create exceptional native mobile applications.

Senior developers should be able to integrate all native libraries and frameworks into their applications. By using React native, they must be able to create more cross-platform and yet more native.

Code quality improves with Continuous Integration and Continuous Delivery. It allows developers to better understand their development process. Additionally, it enables them to deliver real-time info. to users. So, Senior developers must be able to set up CD/CI.

In order to create more apps on your portfolio, a senior developer must have React Component skills. Developers should be familiar with the other development approaches and select the one that meets their needs.

Developing new ideas and perspectives is a crucial skill for a senior developer. At the end of the day, they need to have an idea of what exactly they will do in order to enhance React Native component skills such that they can offer excellent apps for the company.

Also Read:
How Much Does React Native App Development Cost?

Common Skills to Focus On Before Hiring Reach Native Developer

Ideally, you should hire JavaScript-experienced developers. Mobile development is all about JavaScript. Candidates should have experience creating components, constructing application logic, and understanding their flow.

Native React app developers should be knowledgeable with concepts like JSX, Virtual DOM, & component lifecycle. You need to verify that the developer knows these terms.

React Native developers must understand the distinctions between Android & iOS app development. For the app to run on various devices, the developer must be familiar with Objective-C and Swift.

Software development is a vast field, and you can’t expect the person to know everything about it. But it will be a huge positive if they are familiar with at least some extra tools like Enzyme, Redux, Hockeyapp, and so on.

Your app developers should write consistent and understandable code. As far as upgrading the app is concerned, creating clear codes is a must considering the future of your apps.

So there you have it. All you need to know about adding more people to your project team and hiring the best React Native Developers. To recruit a dedicated React Native developer on your own, follow the steps in our guide or connect with us. Let’s solve your problems together!

You’ve come to the right place if you’re looking for a potential opportunity to start working on your dream project. At MobileCoderz, we place a high value on providing professional and dedicated React Native developers to our valued clients. No matter how big or small your business is, we are committed to providing great business solutions through distinctive mobile and web apps.

The following are some of the services we provide for React Native applications on a 360-degree basis:

Get in touch with us today and develop your React Native apps at reasonable rates.

What Will Be The Mobile App UI/UX Trends In 2021?
How Much Does It Cost To Develop A Cloud Kitchen Platform?
Angular 8.0: Summary of Upgraded Features & New Add-Ons.
Top 7 Artificial Intelligence Trends To Watch in 2022

One response to “How To Hire React Native Developers For a Business ?”