Why Should You Hire React Native Developers to Build Your App ? 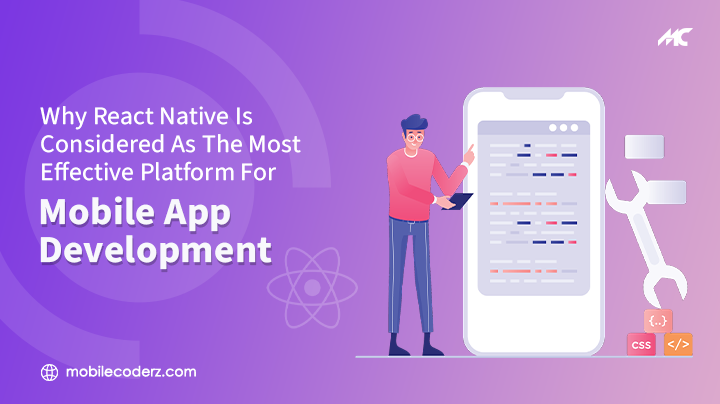 React Native was developed while Facebook was looking for a way to make their app more resilient and speedy without causing any downtime. It has been in focus since its release. Facebook is confident in its technology and has utilized React Native development to create Facebook & Instagram advertisements.

React Native is a cross-platform system framework. React Native makes it easy to build stunning apps. As a result, it is making an impact on the field of mobile app development.

As smartphones have become such a vital part of our lives, it is critical for developers to create apps that are both Android & iOS platform compatible and user-friendly. As a result, React-based mobile apps have become the rage.

Prior to the release of React Native, developers had to create separate versions of an app for the Android & iOS platforms. This procedure was time-consuming and cost-prohibitive. However, React Native came to the rescue, allowing developers to construct applications for different platforms using the same codebase.

In its years of evolution, React Native development services have emerged as one of the most viable frameworks for the building of mobile applications. Many firms nowadays prefer to build apps with React Native because it allows them to deliver their products on both platforms with just one codebase. This also eliminates the need to hire two distinct teams of developers to maintain two independent code bases.

React Native has been the most popular framework for creating highly functional apps with a lot of traffic since its release. There are a number of global companies using React Native. Here’s a rundown:

React Native for App Development: Why Use it?

React Native may provide you with a number of features that other frameworks cannot. Here are the benefits of using it for mobile app development:

The idea behind cross-platform mobile app development is that the written code may be reused for both iOS and Android applications. React Native Development apps follow the same principle. The idea behind it is to write once and launch everywhere.

Developers will benefit from this. They don’t have to create individual designs for each platform.

As a result, cross-platform apps perform at a similar level to Native apps. React Native combines React JS with a Native UI toolkit and Native APIs to create a single application that runs on both Android & iOS.

As a result, we can reuse the component logic, state management, & React hooks from a React JS online project. It creates a superior mobile app with all of the Native features. This cuts down on development time and lowers your overall app development costs. Faster development means you’ll be able to publish your app as soon as feasible and enter the competition ahead of schedule.

Additionally, because it uses a single codebase, you won’t need to engage separate developers to create apps for Android & iOS.

In the same manner that JavaScript creates user interfaces for the browser, React Native acts as a platform bridge. This bridge describes how the application programming interfaces are rendered Natively on that platform. It ensures that the app is built with true mobile parts rather than web views, which load clumsily and scrappily. The bridge provides the app a more professional and personalized appearance.

React Native includes smart debugging tools built-in, which have a lot of benefits for cross-platform development. Error messages are detailed and they have a purpose. Developers no longer have to rack their heads when they receive a notice from an old fatal system.

If the program crashes during testing, you’ll be able to pinpoint exactly where and why the issue occurred. It’s quite simple to go back and make changes. React Native Development has excellent error reporting.

The core of React Native is a live reloading feature. Developers may work with code changes & fix them while the app is loading with this capability.

While hot reloading simply reloads a certain portion of the modification, the live functionality reloads the entire program once you make changes. The React Native development and testing processes are made easier.

Also Read:
How Much Does React Native App Development Cost?

Why You Must Hire React Native Developers?

When you choose to hire React Native developers for your app, you can look for the top talent from all around the world. There is a large pool of developers who have years of expertise in building React Native Development apps. Experts know the approach to use to create an app in the shortest amount of time. A shorter development period implies the software will be available online sooner.

After you’ve decided to develop your project with React Native, you’ll need to figure out how to get it done. It is usually a good idea to hire React Native Mobile App developers.  You will save money and time as a result of this. It also saves you the time and effort of developing your app independently for Android & iOS.

Why do individuals prefer to select experts with experience over those with a fancy degree? It’s the number of hours spent coding & debugging while working on multiple projects. That is what gives the app its excellent quality and performance.

Hire React Native developers from a top-notch React Native App Development company like Mobilecoderz to ensure that your mobile app project receives the quality and expertise it requires.  For any problems, you can connect with us. Our clients have access to us 24 x 7.

Being widely adopted, React Native is buzzing in this era of mobile app development. It gives developers the opportunity to create complicated and larger apps with ease.

It allows you to keep ahead of the competition in the market by reducing time and other costs and also ensures that your users have a consistent experience across iOS and Android platforms.

With MobileCoderz, you can keep your business on the cutting edge. To develop your mobile applications, contact our React Native app development professionals.

5 Secrets Of Food Delivery App Development Unlocked With Estimated Cost
Progressive Web Apps Vs Native Apps: Which One Is Better?
How To Build a Meditation App Like Headspace and Calm?
Fitness Application Installs Up 67% Since Covid-19

3 responses to “Why Should You Hire React Native Developers to Build Your App ?”