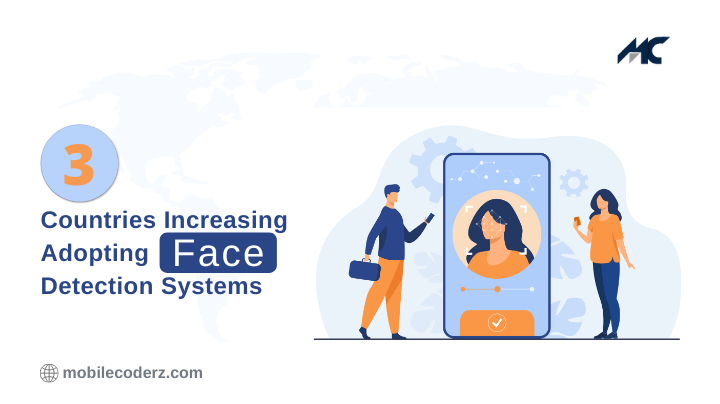 From 2020 to 2027, the global facial recognition market is forecasted to rise at a CAGR of 14.5%. Facial recognition is a form of image recognition technology and has gained worldwide prominence in recent years. It makes use of a digital camera that accurately identifies facial features by matching them against a database of “biometric templates”. This technology has proven to be very versatile and is therefore being rapidly adopted by numerous countries. In this article, we will be discussing the application of face detection systems in three countries that are at the forefront of using this technology: The U.S, China, and the UAE.

In the U.S., interest in face detection systems is surging, and numerous companies have employed this technology for law enforcement applications. Axon AI, a Seattle-based company, is reportedly working towards adding facial recognition technology to its range of software products that will allow law enforcement departments to rapidly identify customers while blurring out sensitive information from police footage.

Few industries place security and fraud prevention at a high priority as much as the banking sector. US-based banks are efficiently making use of facial recognition biometrics with the intention to weed out fraudsters, onboard customers remotely, and safeguard their security systems from financial crimes such as data breaches, identity theft and money laundering. JP Morgan Chase, HSBC Holdings, and USAA have employed Apple’s FaceID to allow customers to securely log into their banking apps, while Lloyds Bank in the UK has been testing similar technology using Microsoft’s biometric face detection systems.

When it comes to face detection systems, China leads the pack. The country has 170 million CCTV cameras, many of which use machine learning to enable facial recognition. In 2017, China also filed more than 900 patents for facial recognition, as compared to 96 patents filed by the U.S. in the same timeframe.

Police in Nanchang have also been able to identify criminals from a crowd as big as 50,000 individuals through facial recognition cameras. Meanwhile, the same concept is being used by police officers in a railway station in Hanan province, where “smart glasses” integrated with face detection systems are used to detect criminals.

Furthermore, educational institutions are also enhancing their security systems through biometric identity verification technology. A school in Hangzhou, for example, scans students through face detection cameras once every 30 seconds to monitor their behavior and get a better idea about their emotional states that helps them in providing a better learning experience.

Face detection systems are also gaining ground in service delivery in China. For instance, to board Shanghai’s subway platform, voice recognition and facial biometrics are used to verify passengers before they are allowed to enter through the entrance gates. The same technology is also being implemented at Beijing’s subway station.

Numerous financial institutions have also joined the bandwagon by increasingly employing biometric technology to make customer onboarding and transaction processing more convenient. One example is that of the Agricultural Bank of China (ABC), which uses face detection systems to scan the identity of their customers before they.

In November 2020, face detection systems were also introduced at Dubai’s metro stations to safeguard the commuters and residents. This technology has assisted law enforcement agencies to identify suspicious activities and detect wanted criminals commuting through subways. Furthermore, the UAE cabinet also recently approved facial recognition as a better alternative for the manual process of ID document authentication. Although it is currently approved for a few selected government and private institutions, the retail industry, healthcare sector, border control, and security departments, and financial institutions will be one of the first sectors to take advantage of this face detection system.

Also Read:
The Next New Generation in Town: Flutter 2.0

It will allow you to handcraft the dazzling experience where your designs and brands come at the vanguard. It is bagged with thousands of contributors who are extending the ecosystem adding the core frameworks to the ecosystem.

Pranay Aggarwal,  Co-founder and Chief Operating Officer at MobileCoderz, shares this announcement will leverage the businesses as it will add new opportune. It can perfectly integrate the performance, practicality, and functionality all in one place. You can consider it as one of the best solutions to develop multiplatform applications.

MobileCoderz has established itself as the first choice of small and medium size Business in the mobility space within a short span of time. We have a young & talented team of mobile strategists, UX/UI designers, and App Developers.We have the client base that spreads across emerging startups to small & medium size Business across the globe. MobileCoderz has helped in the development of World Class mobile apps for 100+ clients, collaborating with its team of 60+ nerds.

Wearable Technology: The Apple Watch Market Continues To Upsurge As Smartwatch Demand Goes Up
Is Cryptocurrency Set to be Banned in India and Traders to be Penalized Soon?
The Best Technology Stack For Building a Live-streaming Application
Avoid 10 Mistakes When Developing React Native Apps