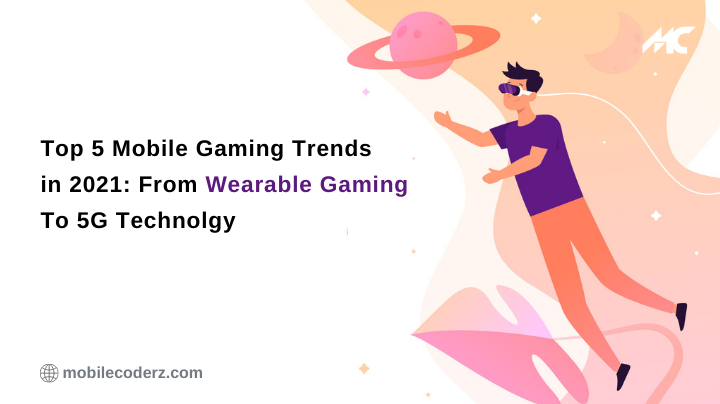 It is an undeniable fact that the game industry has been influencing the world of technology from the past few years.  The splendid popularity of online gaming platforms turned millions of heads towards the unique features of the games that trending among the present-day gamers. In addition to this, the advent of technologies like VR and AR is also proving the role of phenomenal tech innovations in the growth of the gaming industry. Some trending games like Pubg lite mobile, Pokemon Go, Angry Birds, Subway Surfer, Clash of Clans, Candy Crush, etc. brought a revolutionary breakthrough mobile gaming industry as there are numerous factors behind their massive success in such a shorter period.

The impact of AR & VR technologies is witnessed on the grounds of imparting real-world experiences alongside sailing across the virtual spaces. The remarkable potentials of these two technologies are escalating the surging demand for games of varied genres that are based on out-of-box ideas for game enthusiasts across the world.  It is a matter of fact that the majority of tech giants are more concerned about the latest mobile game trends in 2021 to achieve the best outcomes with the reach of global customers.

Currently, more than 2.2 billion online gamers are active on their mobile devices. The rapid rise in the growth rate of players on mobile games signifies that more and more people are switching to mobile games to spend their free time.

Right now, the majority of mobile game companies & tech innovators are inspired by the recent development in Augmented Reality and Virtual Reality technologies that are gearing up the mobile game development trends in 2021. We all know that mobile gaming differs from the concept of console or desktop gaming and surprisingly, most techies are foreseeing its massive rise in the next few years.

Back in 2016, the record-breaking rates of revenues generated from mobile games began sparking up the minds of millennials to opt for mobile game development services. As far as the future of mobile gaming is considered, it covers more than 60% of the global gaming market including gamers from the 5 big nations, the US, South Korea, Japan, Germany, & China.

1) Wearable Gaming on the Top

It is been a while since wearable tech is around and game developers are influenced to leverage this technology for mobile game development. The combination of smart wearable with AR/VR tech adds on to the possibility of providing the best gaming experience to the users. Right from basic puzzle games to sports games with high-quality graphics & features, game apps with VR/AR impart life-like user experience to those who’re crazy mobile gaming.

These technologies are empowering businesses that intend to make money with mobile game app development. No doubt, the profits will be over the top when your game app will gain popularity like other trending mobile games in the market.

2) Cloud Gaming is Already in Trend

Since internet connections are getting more speedy and dependable like never before, cloud computing continues to attract attention with the passing time. In the coming two or more years, people shall start playing games on any internet-friendly device or gadget with uninterrupted access to the features of mobile games.

Although gamers will be able to enjoy streamlined gaming experiences as similar to living video and music, they may need to install updates for the games that are based on this evolving gaming technology. In this way, cloud gaming technology can bring a change not only for mobile game development but also to those who can’t afford console or PC and rather choose to play mobile video games via the internet.

Undoubtedly, social media gives a power boost to user engagement to any kind of apps available in the market. When it comes to mobile games, people are fond of using integrated social media tools that enable them to compete with their friends, join tournaments, & win their position on the leaderboards.

Social media is a peculiar aspect of the success of top trending mobile games on mobile platforms.

Also Read:
How Much Does App Development Will Cost in 2021? Let’s Peep into the Future

Getting back to the days of using handheld consoles in the early 2000s, the audience is still mad over the fun of playing their favorite video games on mobile gadgets rather than switching to tablets or mobile phones. We can say that consoles like Playstation and Xbox for video games are irreplaceable.

Looking over the current market scenario, the use of handheld game consoles is a turning point in the futuristic predictions of the mobile gaming industry.

5G internet will play a big role in the mobile gaming experience. Right from gaming routers to home internet, 5G connectivity will go beyond the limits of the fastest internet speed defined for lag-free gaming sessions across advanced devices, consoles, & gadgets used by the gamers. In other words, 5G technology will add more value to mobile game development in terms of wider coverage, strong connections, better speed, & lower latency.

The list of top mobile gaming trends is not limited to cloud gaming, social media integration, AR/VR, wearable tech, & handheld consoles. We’ve much more to explore about the tools & technologies that are revolutionizing the online gaming industry. Alongside these trends, game developers are also focusing on cross-platform technology, UI experience, multiplayer setup, location-based features, & other exclusive add-ons to meet the real aspects of mobile game development.