How Long Does it Take to Build a Mobile App? 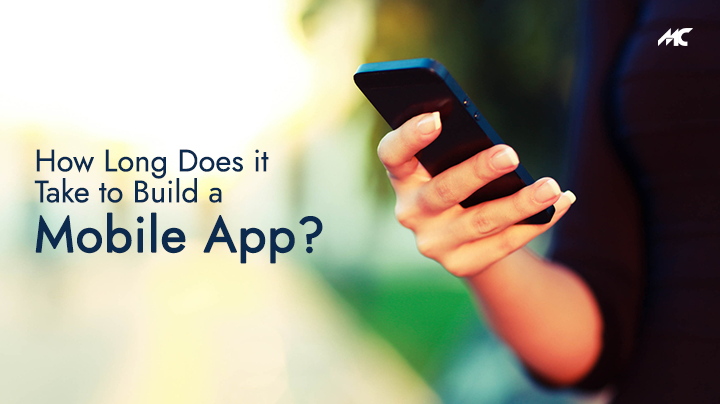 The most common answer is approximately four to five months. But there’s no sure or easy solution to this question. A variety of elements affect the mobile app development process. Today, we’ll discuss the different steps of the process of developing apps. It will help startups and companies better understand how different factors influence the mobile app development process.

The process of developing an app has distinct stages and all of them require different time slots. From the planning stage to the launch time, the whole process is dependent on each other and requires regular attendance. It’s obvious that apps of various sizes and features will require different time to develop. The key stages for the mobile app development process have been discussed below in detail.

Scope of the App & Research

It is generally accepted that a smaller application will take a shorter time to develop than one that is large. So, the first step to determine the mobile app development process will be to define the features of the app. You must not end up needing to revisit later to include other features.

The best method to define the scope of your app is to look at the needs of the targeted user. Then find out if there are similar apps providing the same services. If there are, it’s crucial to know the features that will be unique to the app that is coming out. Also, you must determine if there is a need for the services offered by the app.

What is the time frame to create an application? It’s all about the quantity of features and functions the app offers users. It is usually determined by the strength of the market for the product that the app provides. It is then time to describe the method of operation for the app. In addition to deciding on its capabilities and the tasks it can perform, it is also necessary to decide how it will manage and source information.

To determine the mobile app development time, usually, at this point the storyboard is designed to show a clearer depiction. It outlines the interface for users and the connection between the various screens. The more features and functions an app offers, the more time it’s going to take to create. Also, one must determine the amount of operating systems that it will become accessible to download.

The reason is because mobile app development for multiple platforms can take longer than developing for one platform. Furthermore, Android apps take slightly longer to create than apps that are designed for the iOS platform. This is due to the fact that there are different types of Android devices. Even the app developer has to make sure that the app is compatible with all Android devices.

In the case of smaller apps, the process of scoping can take between two to three weeks. A second week may be needed for an app of medium size. A large project could take 3-4 weeks for the scoping process and gathering of requirements for the project to complete.

In simple terms, the Front-end team takes care of things like wiring, UI creation and improvement and caching. The back-end is responsible for data integration, data storage, the management of users and versions & other aspects. All of these require programming to calculate the outputs which appear at the top of the UI.

It is clear that for the app to work seamlessly, the team needs to communicate constantly. Otherwise, delays may occur.

The development of an application takes how long? That depends on its size and its features. The average mobile app development time can range from two to three weeks. Depending on the complexity and features, it could even take 9-10 weeks.

After you have the UI concept and the mobile app development is finished, the app has to be checked. You must ensure that it’s not contaminated by bugs prior to being released on the app store. The Android app development company evaluates the app & identifies the flaws within the program and resolves it.

However, this type of testing, also called alpha testing, is not sufficient before the app is released to the market. In addition to the internal tests, beta testing has to be completed. It will help to find out if there’s any issues that users could encounter when downloading and using the application.

It is necessary to pinpoint the correct group of users to be the intended audience for the app. As the majority of bugs are eliminated in the alpha testing, the beta testing process shouldn’t be too lengthy. In general, it could take one month for the beta testing process to conclude. It could even require several iterations of testing and debugging until all flaws are eliminated.

What is the Time Frame for an App to Go on the Market?

As mentioned above, the procedure of mobile app development consists of four steps. They could together take anywhere from two months for a basic app with not many features. It could take up to four and one-half months for an application that includes many options and functions. Remember to keep in mind that this is only an estimate that is not exact and may differ significantly. It entirely depends on the team’s expertise, their procedure used and the amount of time spent testing.

It is not every business’s case that they have the funds to hire an in-house team of developers and designers. Thus, when you Hire a proficient Android App Developer, it depends on the prior expertise and experience of the mobile app developers. Also, the alpha and beta testing part is the main obstacle for the Android app development company.

It’s also essential to communicate with the team that develops the app for a couple of months after deployment. The team can take notes from the users and improve the app even after the launch.

MobileCoderz is a web & mobile app development company that has experience in developing iOS & Android apps. Working with us gives advantages of scaling the team size up or down & access to coders and expert developers.

We aim to minimize the time needed to launch. We ensure that our design team and developers collaborate to maximize the front-end & back-end systems. In addition, our team attempts to work with you seamlessly and help you counter all the defects of your apps. For the cost of app development and further assistance, you can get back to us.