Go Vs Rust: Which Programming Language is Better & Why? 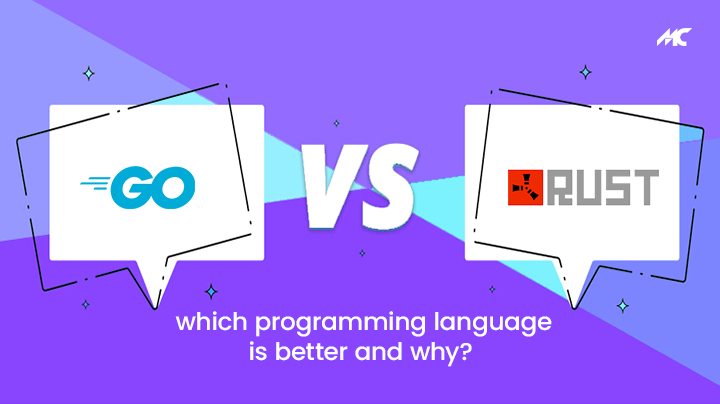 In a dynamic environment, the best programming language is key to success. Developers provide their customers with the best technology expertise. It has become increasingly difficult for businesses to select one language over another in order to build reliable and efficient apps. With new algorithms and changing advanced mechanisms, modern-day developers are well-versed to help businesses in their difficult decisions. Moreover, Google’s multi-paradigm programming language, Go Vs Rust web development, another multi-paradigm programming language, are currently the most popular languages in technology.

As two common languages, they share several characteristics, such as being called “Language” tools. Rust and Go share many similarities, but they also differ quite a bit. In this article, we will compare both languages as well as discuss them independently.

Here we will go through both the languages independently and have an overview of them. From basics to advantages, you will get it all.

Often called Golang, Go is a high-performance language with statically typed syntax. It improves the stability and effectiveness of server-side apps. In 2019, Go was the most expressive, fastest-growing & high-performing language. It performs the functions of a compiler, compiling the programs and ensuring compatibility & transformation. You can write code in parallel with your code to keep things simple. Go web development is popular for Dependency Management, Inbuilt Concurrency, & Garbage Collection.

The pros of Go Programming Language are as follows:

Rust extends one of the language families of ML. Better modularity, security performance, & parallelism are all benefits. It enables you to write code quickly while using minimal memory. Rust is the foundation of Mozilla, a well-known web browser. Rust is a programming language that combines the Haskell, & Ruby programming languages.

Also Read:
How Much Does It Cost to Develop A Chatbot?

The pros of Rust Programming Language are as follows:

Rust Vs Go: What is Common?

The similarities between Go and Rust are one of the reasons they are frequently compared. Have the languages got some things in common? Yes, they have. Below is a list of all the similarities. The below points will help you have clearer thoughts of these languages in mind.

The two programming languages Go and Rust programming languages come from a group of languages that prioritize memory safety. We have been using old programming languages like C and C++ for many decades. So, it has become clear that unsafe, insecure memory access is one of the many causes of security issues. They both take a different approach to this problem. But they both aim to make memory management more efficient, safer, and easier by developing efficient and correct programs.

Each language is compiled, meaning that your programs are directly converted into machine code. It allows you to distribute your software as a single binary file.

Its scalability makes Rust and Go ideal for huge teams, large codebases, or both.

Rust or Go: Which One to Go For?

The downside of Go is that it sacrifices runtime speed for convenience by automating operations. In contrast, when comparing performances between Rust and Golang, Go loses the race to Rust.

Nowadays, most applications are dispersed and networked. Therefore, languages that address these issues lag behind. It is essential for developers to be able to work independently. Also, they must communicate status among themselves without exposing their data to manipulation.

In Golang, concurrency has been built into the syntax from the very beginning. Async/.await is adding concurrency to Rust’s native grammar. The parallelism in Rust compensates for the memory instability of Rust despite lacking Go’s developer skills.

When comparing Rust’s memory management with that of Go, Rust uses a compile ownership model along with cost-free abstractions. The compilation will fail for Rust programs that are not memory-safe.

Go is a memory-safe language, like Rust. Runtime memory handling is handled in Go automatically. In Rust code, no memory will be allocated or released.

The development rate is vastly more significant than the program rate. Python is a good example of this, as it is among the fastest to execute as well as build software. This is also true of Go. The simplicity of its syntax and incisiveness make it faster than many other languages.

In contrast, Rust has more features and flexibility, so it will take more time to learn. For higher development speed, Go is preferable to Rust.

#5. Rust Vs Go: Getting Popular

The future is bright for both of these languages. Both languages are geared toward a greater audience of programmers. Current trends indicate that Golang is significantly faster than Rust. Furthermore, Golang flexibility makes it easier to work with large teams of developers and write a variety of services.

Golang makes it simple to create a well-factored application that fully exploits concurrency while being delivered as a microservice set. Rust does most of the things listed above, but it is perhaps a little more difficult. Rust is fixated on preventing memory-related security vulnerabilities. This means the coder must go out of their way to accomplish something that would be much easier with Golang.

Invest in the best mobile app development services by MobileCoderz Technologies. With our mobile app and web development company, advanced services, and software expertise, you can always be one step ahead of others. Moreover, in the field of programming languages and digital technology, our company offers innovative services to customers. Feel free to get in touch with us anytime anywhere.

Rust and Go aren’t rivals, despite the fact that they’re both modern, advanced, popular, & widely used languages that aren’t going away anywhere anytime soon. They cater to a variety of situations. In applications where speed of execution (for example, when handling huge data sets) is the primary concern, Rust programming language is a great choice. As an enterprise-level language, Go’s build speed makes it an ideal choice for software development teams with a large staff.

Ultimately, you will need to pick which language is most appropriate for your development needs. With this information, we hope you feel more confident about making your decision. We hope you are content with us and admire our efforts in compiling such content in a nutshell.

Top 10 Online Dating Apps for Android in 2022
MobileCoder’s Quarter on Quarter Revenue grew 30% in 2022
UI/UX Design on Your Mind? Find its Importance Here!
Android 12: Everything You Need to Know About the New Android OS