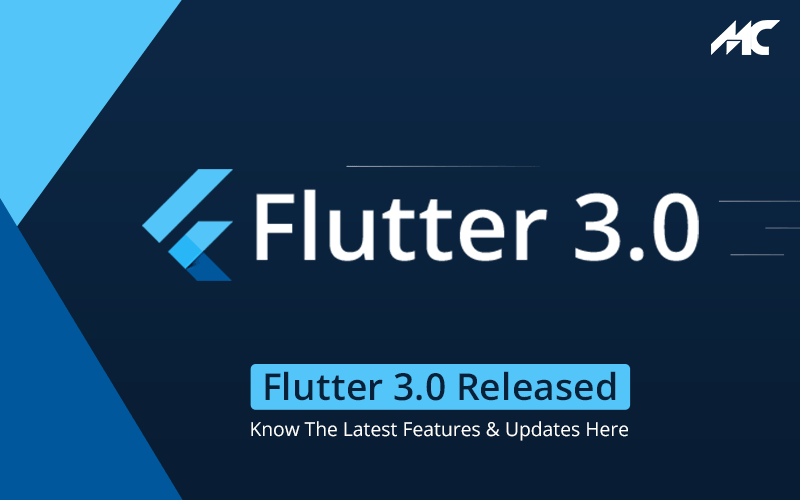 So the wait is over. The new Flutter 3.0 is live now and developers are excited to use Flutter’s new features in their mobile app development. The latest Flutter 3.0 comes with many exciting features and extended support for Android, iOS, Windows, Linux, and web apps.

Since Flutter is a popular and widely used framework in the mobile app development field it makes it worth knowing what Flutter 3.0 has to offer for developers and business people who want to create powerful apps with Flutter.

If you are planning to hire Flutter app developers or use Flutter in your tech stack, you must want to know about Flutter 3.So this blog gives you complete information about the latest release Flutter 3.0.

Here, you will know

Flutter 3.0 is the latest version of Flutter. It is Google’s UI SDK or framework for developing cross-platform mobile apps. With Flutter, developers can create unique mobile experiences for 6 OS platforms with a single codebase. It provides unmatched productivity to developers and empowers startups to turn their innovative app ideas into fully-functional mobile applications at ease.

It has new compilation and build support, input and interaction models, platform-specific integration,  better accessibility, and multi-lingual support. Flutter 3 comes with enhanced performance with many improvements in its existing features.

What are the new features in Flutter 3.0?

The new Flutter 3 provides dedicated support for foldable mobile devices. It has new features and widgets that enable developers to build dynamic and responsive mobile apps for foldable mobile phones. This feature has been made possible after the collaboration with Microsoft.

These elements were not available in the previous version of Flutter. And now it would be interesting to see how the developer community will use this new feature because the apps for foldable phones are still evolving.

2. Menu Cascading and Support for the MacOS System

Flutter has fresh inputs for platform-specific integration. It offers better accessibility and interactive models for compilation. The primary purpose of this update is to give better flexibility to developers so they can efficiently utilize the operating system.

In Flutter 3.0, developers will find a new widget called [FlutterFire UI] which offers developers a reusable user interface support for authentication and profile screens. The introduction of extended support of Firebase with Flutter was already in demand for a long time.

Firebase provides services for developing web and mobile applications. Around 62% of Flutter app developers use Firebase in their mobile app development projects. Therefore, the integration of the new feature in the form of a widget [FlutterFire UI] will give more capability for user interface reusability.

Flutter is mostly popular for cross-platform mobile app development. Developers have been using this technology for creating business and customer-centric features. But now, they can also create mobile games in the Flutter apps.

Flutter 3 comes with the Casual Games Toolkit. This kit provides a range of templates, best practices, and dedicated support for creating lightweight mobile games for different operating systems. However, the Causal Game Toolkit does allow you to build high-power action or 3D games like PUBG. But you can create a fun game like pinball or angry bird for casual game lovers.

It has improved tools with a new version of the [package:lints]. This tool allows checking Dart code against Flutter’s conventional development practices. In addition to this, the Dart 2.17 comes with many improvements in its core tools focusing on enhancing the productivity and speed of the Flutter developers.

6. Material 3 Support in Material You

Flutter 3 offers new support in the [Material You] feature with the updated version of Material 3.0. It contains new visual effects and design elements which help developers and flutter app development company take more advantage of the Material You feature of Flutter. With Flutter 3, developers will get better adaptability and a cross-platform design system which comes with dynamic color schemes and improved visual components.

Flutter 3 performs faster than its previous version. Its opacity animation performance has suitable changes for simple case scenarios which will aid in creating simple animation-based UI elements. These improvements give advantages to both developers and businesses.

For example, when an Opacity widget contains a single rendering primitive, its save layer method is excluded.

This ability was not available in the previous Flutter version. But in the latest version, there is a mechanism which predicts the rendering difficulty of pictures as per the executed operations.

Apart from this, the Flutter team is planning to implement this optimization method in more case scenarios in the upcoming releases. It means it will further improve the speed and performance of Flutter app development in near future.

Flutter 3 has improved rendering capacity. It offers support for variable refresh rates and ProMotion displays on iOS platforms with enhanced refresh rates. In the previous version, Flutter 2.10 has a 60Hz refresh rate, But in Flutter 3, the rendering capacity has increased up to 120Hz. This improvement aids developers with a seamless scrolling experience while watching fast animations.

Flutter 3 incorporates new APIs that automatically detect images from the main thread asynchronously. It is executed via the in-built image codecs of the browser which enhances the image decoding speed by 2x and also ensures the main thread is never blocked and removes all junk files made up in the past.

Most Exciting Features in Flutter 3.0

Flutter 3 comes with wide theme extensions. It allows developers to combine anything to the ThemeData of the material library with the help of Theme extensions. If you have a custom widget outside the [MatrialThemeDat] properties that require custom attributes, with this updated feature you can ease the complexity of creating custom theme attributes for your widgets.

Material You is among the hot features of Flutter. It now offers more visual effects and design elements for text and typography. The Flutter dev team has tried to give an adaptable cross-platform design system to let you transform your simple-looking Flutter app into an eye-catching Flutter app.

In the previous versions of Flutter, there was no support for developing mobile games in Flutter apps. But with this latest release, Google has provided dedicated support for creating mobile games. The Flutter Casual Mobile Game Toolkit provides many templates and mobile game development techniques and helpful tutorials to build the next-gen casual games with Flutter app development.

How MobileCoderz Can Help You?

MobileCoderz is the top flutter app development company. We have been using Flutter technology for many years for creating user-centric mobile apps for ranging industries. We have a dedicated team of qualified Flutter app developers who hold great excellence in using all the tools & features of Flutter for creating apps for Android, iOS, and other operating systems.

Our team stays up-to-date and implements the latest Flutter development practices. So when you partner with MobileCoderz for Flutter app development, you get the best Flutter team and expertise for your app project.

Since Flutter 3.0 comes with many exciting features, MobileCoderz can help you take early competitive advantages by providing you with effective mobile app solutions with Flutter 3.0

Schedule a Call and Talk to Our Team Right Away.

Most popular and commonly used Android M APIs
How to Choose a FinTech App Development Company?
What’s New in Flutter 2.8 Upgrade?
Unity vs Unreal Engine: An entrepreneurial guide to choose the game engine for your next project?