What Features Make Flutter The Best Option for MVP Development 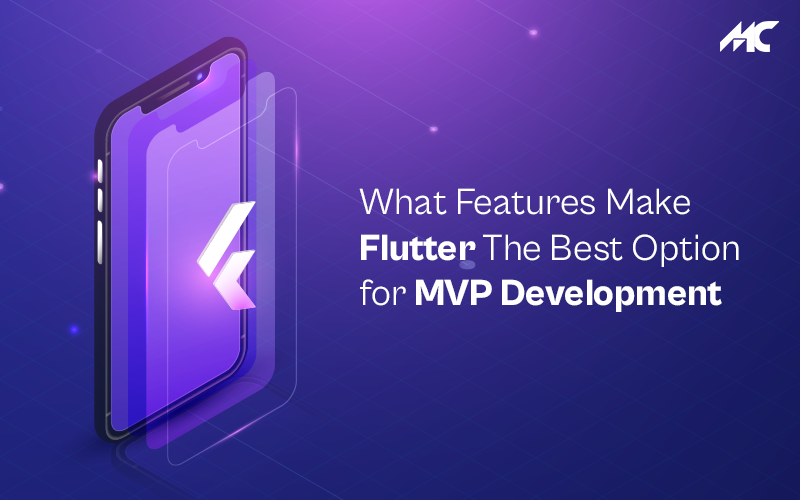 Do you have a brilliant mobile app concept and want to establish your business through this?

Then, before you start developing your mobile app, you should use flutter for MVP development first to ensure you achieve success in the market.

Flutter is Google’s powerful UI SDK. It allows developers to build beautiful and intuitive user interfaces for mobile applications. But most importantly, it also helps in creating an MVP in mobile app development.

Facebook, Amazon, Spotify, Uber, Airbnb, Dropbox, and Instacart are highly successful mobile apps. And you would be surprised to know all these iconic apps first were launched in MVP versions. Then after collecting customers’ feedback for some time, companies released updated versions of their apps. So, all these apps got successful through MVP development.

Hence, if you also aspire to make your mobile app fully successful, then you should focus on creating an MVP.

And in this blog, we will tell you why flutter is the best option when it comes to creating an MVP app. You will know what features make Flutter for MVP development a reliable and useful technology.

What is MVP Development?

MVP is a minimum viable product that contains the essential and sufficient features of a product. The purpose of developing an MVP is to validate the idea of a product and check how it performs among real users.

The core idea behind MVP development is simple-to create a minimalistic version of your concept with enough features. And then, check whether it stands out as per the customer’s expectations.

So MVP development allows you to validate your business concept. You collect feedback from customers and identify their needs and problems to include them in your next version of the product.

Famous Mobile Apps That Got Succeed After Launching MVP

Why do you need an MVP in mobile app development?

Developing a mobile app is a complex process. It requires in-depth market research, app ideation and validation, development and testing, and so on. Startups, business people, and entrepreneurs have to invest a significant amount to work with a mobile app development company to build the app as per desired business models.

But interestingly, if you see market reports, despite putting so much time, effort, and money into mobile app development, many app founders and startups failed to make their app concept successful in the market.

So why do most startups fail in the industry?

Take a look at the below data 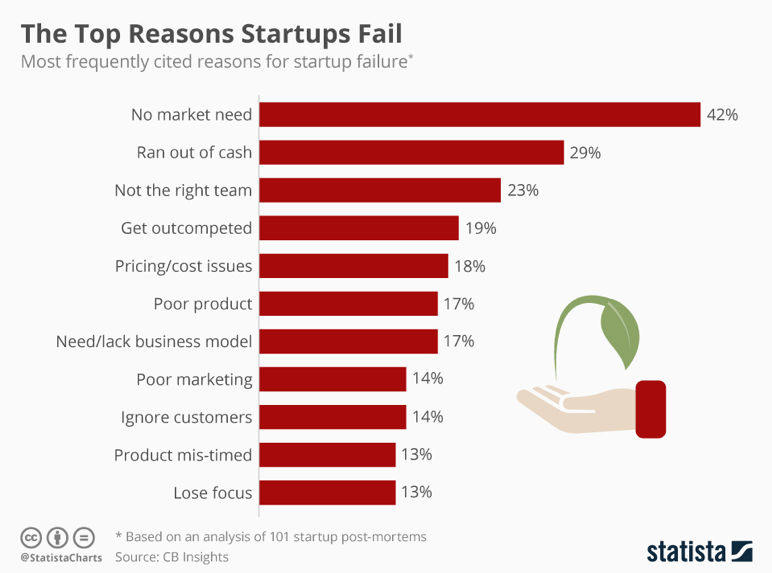 According to a report from CB Insights, one of the top reasons for startup failure is they mostly come up with a mobile app concept that has no market need.

Hence, you can see the major reason why startups fail to make their mobile app successful in the market is not clearly understanding the market needs. And this is where Flutter can help you create an effective MVP mobile app to better understand your audience’s needs.

What Features Make Flutter The Best Option for MVP Development

And since Flutter is an open source technology. So, you don’t have to spend a lot of money on using this framework. You can easily hire flutter app developers to create an MVP app at a low cost.

Flutter is a feature-rich SDK for cross-platform development. It comes with a rich number of ready-made widgets and components that assist Flutter app developers in building apps quickly and easily. Developers don’t need to recompile the code while making changes or fixing bugs in the app.

Flutter comes with the Hot Reload feature and Dart VM that automatically updates classes and recreates the widgets. Hence, it enhances the coding and development speed.

The purpose of developing an MVP mobile app is to gauge the audience’s interest. You are already mentally prepared to make changes to your app. In this case, Flutter provides you with great support in updating and rebuilding the app efficiently.

Flutter is a cross-platform development framework that uses only a single codebase. It means you can easily edit the codebase to add new features to your app. Therefore, Flutter allows you to easily and effectively scale your mobile app.

Flutter is a cross-platform development technology. However, mobile apps built with Flutter offer native app-like experience. It has various tools that allow developers to create an app that looks and performs like native mobile apps.

Flutter is known for its ability to design attractive UI/UX design. You can create an eye-catching user interface quickly for Android and iOS platforms easily. Hence, if you want to build an MVP app that offers the same user experience as Native Android or iOS apps. Then, Flutter is the best option for this.

Flutter is reliable technology since it is maintained by Google itself. This framework has been utilized by the world’s leading brands in developing various mobile apps. Flutter has a good reputation and reliability in the market.

Hence, when you create the MVP using Flutter, it helps you attract investors. They can rely on your app performance since it has been built with Flutter which is a modern tech stack.

Flutter a rich UI SDK framework. It offers a wide range of ready-made widgets and components. As a result, developers do not have to depend on other resources for getting ideas on creating UIs for MVP.

Apart from this, developers can smoothly integrate other functionalities such as Firebase, AWS, cloud platform, and APIs. Hence, by using flutter for MVP development, you do not have to use premium resources. It requires minimum resources for creating an MVP.

MVP contains essential and sufficient features. It is developed to get an idea of how it fits customer needs. So when you create an MVP version of your mobile application, it allows you to gauge what your customer really needs from your app. And make changes to your app accordingly.

Many app owners sometimes have to update or change their app after getting feedback from users. This not only increases their mobile app development cost but also creates a negative impression among the audience.

But when you initially launch your mobile app with MVP. Then, you identify the right needs of users by collecting their feedback in real-time. And based on this feedback you release the updated version of your mobile application.

1. Validate Your Idea At The Beginning Stage

Having a great mobile app idea is no guarantee of success. You need to validate your mobile app concept among the real audience. And with an MVP mobile app, you can do it easily and efficiently.

An MVP mobile app contains enough features that your target audience needs. When you release an app with essential features you can collect feedback to identify their additional needs or find gaps in the app’s performance. Hence, an MVP helps you save from financial loss by validating the app at the beginning stage of mobile app development.

Attracting investors for your mobile app is not an easy task. Investors study deep into your app to ensure how your app will survive and win in the market, But with MVP development, it can be a little bit easier.

By collecting real-time data from customers you can present your app in a constructive way to convenience investors. Since you are working with MVP you can further bring innovative features into your app. In this way, the MVP mobile app can help you attract investors.

3. Save Cost in Mobile App Development

This is one of the major benefits of using Flutter for MVP development. It allows you to save considerable costs in mobile app development. The cost of creating an MVP mobile app doesn’t take a significant amount since it contains only essential features. And it helps you make appropriate changes at the right time and save you from potential financial loss.

Flutter is Google’s powerful UI SDK. It offers rich features and resources to develop an MVP at minimum cost. Apps built with Flutter perform well and give a native-like experience. It helps you create an app at very low costs with high-quality features. Hence, when you use Flutter for MVP development, it helps you deliver the app quickly and make suitable changes efficiently. In this way, Flutter empowers you to achieve success through MVP development.

How MobileCoderz Can Assist You In Flutter for MVP Development?

If you have a mobile app concept and want to test it with an MVP version, collaborate with MobileCoderz and we will build you a high-performing MVP mobile app with Flutter at a cost-efficient budget.

Top IoT App Development Trends You Need To Know In 2020
10 Questions to Ask Before Hiring a Mobile App Development Company in 2021
Know Everything About dApps (Decentralized Applications)
How has 'Squid Game' the hyper-violent show opened new doors for coders?