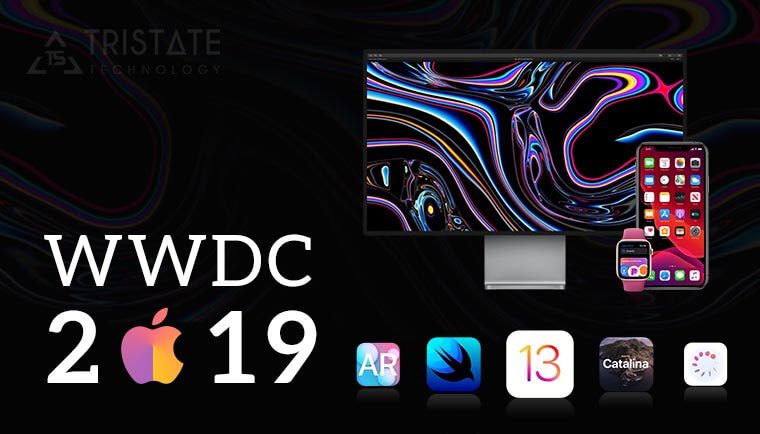 In its Worldwide Developers Conference (WWDC) in the City of San Jose that followed over two hours of software announcements by the tech giant, Apple, here’s a quick recap of what unveiled in the mega event.

This roundup or skimmable package we have designed for those readers who missed the live conference but don’t want to walk through the two and a half hour-long live presentation.

Tech giant previewed MacOS Catalina loaded with a chock-full of new features like new apps and robust new technology for developers. The implication not lost with the preview that MacOS Cataline is going to be a replacement of iTunes with its Apple Music, Apple Podcasts and Apple TV app, some of its popular entertainment apps. In other words, iTunes will be changed to three apps. Users, with the help of their iPad, can extend their Mac desktop as a second display device across creative Mac apps, thanks to the all-new Sidecar feature. The Voice control is another cool feature enabling users to control their Mac with their voice.

Apple’s senior vice president of Software Engineering, Craig Federighi said MacOS Catalina marks the advent of fresh new apps to the Mac debuting new standalone versions of Apple Music, Apple Podcasts and the Apple TV app. Adding further, he said the users will appreciate the way they use Sidecar to extend their workspace allowing for a new way of interacting with Mac apps using iPad and Apple Pencil.

The long list of new features is obviously a massive overhaul to the operating system aiming to optimize its performance in terms of two-times faster app launch times, improved updates, and app download size reduced to 50%.

Effort to optimize security with two-factor authentication to iOS 13 is another upgrade seen at the announcement. With Dark Mode introduced to iOS, Apple’s apps will now lack any color with dark backgrounds. Apple music will have synced lyrics with the song, richer text formatting control in the mail, optimized gallery view and shared folders’ supports.

iPad is one of the split parts of Apple’s iOS (another one is for iPhone) as announced in WWDC 2019 presentation. iPadOS features widgets to be pinned to the home screen, faster switching between apps, desktop-class browsing in Safari browser, compact keyboard mode and new gestures – 3-finger pinch to copy, spread to paste and swipe to undo. The changes to iPad aim to serve it function like a desktop computer or more like a productive machine. Rumors suggest revamped home screen and major software updates with notable multitasking improvements to the iPad. Unverified reports also imply features including dark mode and improved Reminders app meant for iOS 13 will also appear iPadOS.

Craig Federighi, Apple’s software chief revealed the formation of a new iPadOS for Apple’s tablets by splitting up its iOS for iPads.

“Apple has long been tweaking iOS to include more multitasking features, including a split-screen feature, / Slide Over and multitasking improvements, and changes to the dock. These updates have gradually moved iOS in two directions for phone and tablet, causing iPad gesture dilemmas” – Craig Federighi.

To increase the productivity of Apple Watch, the tech giant announced a bevy of improvements – 6 new faces with customization options, taptic chimes, built in audiobooks, voice memos, and calculator app featuring splitting checks or calculating tips. Feature of App Store will allow users browse/search with diction or purchase and install apps directly on the gadget.

The feature of audio streaming APIs will allow users to enjoy on-the-move streaming of different types of content, including sports games. Also featured in the watch is built-in Shazam support, and health app for women to track their menstrual cycle, and can also predict the date of their period to start, apart from updating them with fertility window notifications.

The WWDC was kicked off talking about updates to TV-OS supported by Apple TV HD and Apple TV 4K products. First of all, the Apple TV gets multi-user support helping each user in a family get personalized viewing recommendations that will change based on the profile of each viewer.

Users can also use their personal Apple music playlists and recommendations. Home screen of Apple TV is to have home screen with the capacity of playing full-screen preview video with viewing recommendations to the users.

New Mac Pro desktop computer was unveiled at WWDC 2019 presentation to be made available this fall and while the desktop will cost users around $5,999. In the statement itself, the MacPro was announced to be the most powerful Mac computers Apple has ever created. A monster of workstation, new cylindrical Mac Pro comes with specifications, including:

Pro Display XDR display was announced at WWDC 2019 along with the redesigned Mac Pro. This 32-inch LCD display features Retina 6K display, P3 and 10-bit color with reference modes, and Apple’s True Tone automatic color adjustment. It has 1,000,000:1 contrast ratio and features super wide viewing angle. Compared to iMac 5K display, Pro Display XDR is 40% larger. With cheese-grate styling acting as a heat sink, the screen will handle a full 1,000 nits of brightness indefinitely. Also, it can also hit the peak of 1600 nits. The Pro stand features tilt and height adjustment and a counterbalanced arm because of which users will have the feeling of virtually weightless feel. The feature can also allow users to rotate the display into portrait mode. More details of the product can be obtained here.

SwiftUI was the center of attraction in a packed WWDC 2019 to ensure that developer productivity is improved. It is simply to optimize the way of writing apps, thereby simplifying designing and arranging app interface. With handy SwiftUI, developers will find more quality time to develop great apps plus no time-consuming way designing apps with monotonous boilerplate code. This introduction is also another way of buying the idea of Apple as to what an app should be.

The viability of the app can be understood with the fact that it just takes six lines of code to build a Hello World iPhone app. It also features native support for OS-level features.

Apple has provided a sign-in solution to users who don’t want to share their personal email-id with every new app they install. The logic here is to allow users exercise their freedom of whether or not to allow a service use their actual email address and personal credentials of the users remain private. If the service requires your email address nonetheless, the Apple will create a fake one for you carrying your real name for the app/service. You can also bar from receiving email notification from the app by disabling the unique address.

A privacy-focused approach by Apple allowing users to have their security camera footages end-to-end encryption before the same is uploaded and stored in iCloud for the sake of privacy and security. The catch here is premium subscription of iCloud comes with just 10 days of storage, excluding iCloud data limit. Existing iCloud accounts will use HomeKit secure video cost-free. It is just that the storage required by the footage won’t count against your storage plan.

Companies to support HomeKit secure video, according to the WWDC announcement, are:

In WWDC 2019 keynote announcement was revealed a totally revamped version of Reminders App featuring all new user-interface and intelligent way of creating a reminder symmetrical to your desire. You will be given smart suggestion about the time you want to be reminded, can tag people in reminder, and reminders notification to alert you about the topic with people tagged in reminder in a Message thread. New toolbar allows users to add times, locations, flags and attachments to any reminder.

It is to be updated with better-quality mapping data like broader road coverage, improved pedestrian data, precise address and more information-rich land cover. Users can assign new favorites to access them quickly on the launch screen or can build “sharable” collection of places. Also featured here is “Look Around” that is ground-level 3D view to help users explore locations. Real-time transit data, flight status for airport and ability to share your ETA with people are some features added to Apple Maps.

Memojis are to feature some new customization options, such as users can create virtual version of makeup, piercings, different teeth, and new hats. Animoji is to get updated with tongue detection and new characters, besides allowing users to create a custom animoji resembling them. To create a virtual version of yourself, pick things from ground up like skin color, freckles, accessories like earrings and glasses etc. The animoji create thus can also be superimposed on your face while taking a selfie to add more fun to the cartoon version of yourself.

Now users can rotate video if they’ve shot it accidentally in portrait than landscape mode. Besides, they can also do some touch-ups like color grading with the built-in Photos app. This intelligent app with lots of new adjustments gives a new browsing experience to the users, allowing them see their best and most relevant images as per year, month, and day.

Users can now tap phones together with other person’s AirPods and share music easily. You won’t have to trigger SIRI to respond to an incoming message. Any third party app supported by SiriKit can work with this app.

Apple’s Worldwide Developer Conference (WWDC) for 2019 witnessed some of the most prominent announcements in its California based San Jose. Hailed as the biggest conference of the year, the tech giant laid the groundwork for major introductions to its software platforms also implying company’s future plans.

What revealed in Apple’s annual developer extravaganza with the presentation of myriad new features, tools, and hardware also point to the fact that the company has its ambitious future plan to reinforce its position in the market. We at MobileCoderz tie our perception with the tech giant’s ambitious announcements believing cutting-edge technologies will rule the roost in market in days to come or better say, they are already influencing the market landscape and lives of people by introducing novelty.

For instance, our iOS Application development services represent our core belief to change the status-quo of market that subscribes to the conventional wisdom of technology as a means of changing the way industries worldwide function and rely on. We think that by incorporating integrity, commitment and dedication, besides cutting-edge technology and team efforts, with a touch of empathy to what industries at large need regarding iOS application development service, really make a powerful difference in business.