Why is Flutter the Best Mobile App Development Framework? 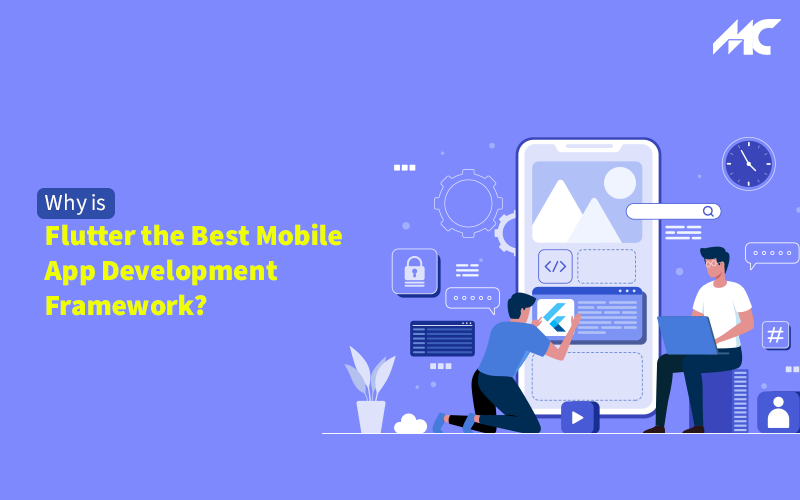 Flutter is transforming mobile app development. In 2018, when Google released Flutter, the Internet was buzzing around the discussions of how a framework can support cross-platform development with a non-java programming language.

And today, BMW, Alibaba, eBay, Dream11, Tencent, Toyota, from big brands to small startups, multiple businesses are choosing Flutter as their favorite framework for mobile application development. Flutter has become one of the top choices of startups, enterprises, and business organizations for developing mobile apps with compelling UI for mobile, web, and desktop.

Flutter has helped various companies in achieving their business goals with the efficient app development process. So it is worth learning what reasons made Flutter the most chosen mobile application development framework, and in this blog, you learn.

Flutter is that it is the only development framework that supports app development without using a Javascript bridge. In Flutter app development, you can smoothly integrate the app with other platforms such as iOS, Android, Windows, MAC, etc.

The Growing Popularity of Flutter

Flutter is continuously witnessing its growth despite unprecedented challenges. According to AppBrain’s recent data, there are over 19 thousand apps built using Flutter and it has a total number of over 9 billion downloads.

The Flutter SDK uses the Dart programming language(intended to replace JavaScript), which is easy to learn. It uses object-oriented programming for any element. It uses a single codebase that allows developers to create a mobile app quickly while saving a lot of mobile app development costs. Flutter is considered a highly useful cross-platform mobile app development framework. Therefore, the demand for the best Flutter app developers is growing significantly in the market.

There are various cross-platform development frameworks that can perform the same things. But why companies are choosing Flutter makes a big sense.

1. Consistent UI Across All Platforms

Using Flutter, Developers can employ the same UI and logic across all the platforms. It allows developers to share the UI code and UI itself. Whereas in other frameworks, developers need to work with components that are platform-specific that need widget data synchronization and property mapping layer. Look at the below canvas that shows how it works.

Flutter has a Skia graphics library that is fast and a solid graphics library with robust backend support. It has a shooting speed of up to 120 fps which provides a fast and seamless user interface. Flutter uses a single codebase, with features like hot reload or hot restart developers can view changes in the code within one second and as a result, it improves the productivity of developers and reduces the time consumed in app development.

Flutter offers great support with multiple IDEs to reduce the complexity of your mobile application. Usually, developers don’t prefer to switch to another IDE when they are familiar with the previous one. Here, Flutter gives access to a large number of IDEs like Intellij, VC Code, Android Studio, etc which eases the development effort and saves time.

Native app development costs a lot and not every company can’t afford it. It offers the best user experience and that is why most businesses prefer this type of app development. However, with Flutter, developers can create apps directly from the machine code- no need for using any intermediate code interpretations. Flutter eliminates bugs and gives native app-like performance across multiple OS platforms which reduce the additional cost involved.

Dart is Google’s own programming language. It is a one-source and general-purpose language and therefore, it is easy to learn and implement into the coding. And the way Flutter app developer community size is increasing, there is a high number of code examples available that support beginners to start with Flutter development. Since Dart is an object-oriented programming language similar to C, you can Hire Flutter App Developers with basic coding knowledge to create simple apps.

In today’s cutting-edge competition, it is crucial to enter the market with solutions for consumers who are waiting. Otherwise, your competitors might avail this chance and develop the solution first and win your future customers.

For this purpose, Flutter works best. It reduces the development time as well as cost which allows you to develop the app faster and deploy it to the market quickly. It takes up to 80 percent of the code in Flutter which is faster than other frameworks.

Its declarative APIs improve the performance and the AI-based hot reload feature saves a lot of time to enable developers to build the app quickly and accurately. So it reduces the development time and allows you to launch your app before your competitors.

Since Flutter is a cross-platform development framework, you can deploy Flutter apps on any platform from iOS to Android or Windows, including all types of devices be it smartphones, smart TVs, tablets. So where is the advantage here? Of course, with one framework you have now a broad market reach to provide the app-based solution.

App development has become a bigger industry and is highly affected by what new features are introduced in every smartphone so app development companies can customize their app accordingly. Today, smartphones are coming with various advanced features such as GPS, Bluetooth, data analytics, which require intelligent apps to enable its features.

Flutter has already surpassed various popular frameworks and broken the traditional coding practices by introducing its own programming language Dart. It bridges the gap between the technology and common people and reduces the risks and coding flaws that hamper a company’s budget and resources. With all the above features, Flutter has become one of the top choices of numerous companies and developers in mobile application development.

But you should keep in mind that Flutter is an intelligent software development kit or you can say a machine that gives you more power to create something amazing for users. The smart decision would be to use Flutter with a professional company that knows how to utilize its full potential.

MobileCoderz is a top-notch Flutter app development company that has built many apps using Flutter for global clients. If you have a project in mind, Book a Call right now and discuss your idea with our Flutter experts.

One response to “Why is Flutter the Best Mobile App Development Framework?”