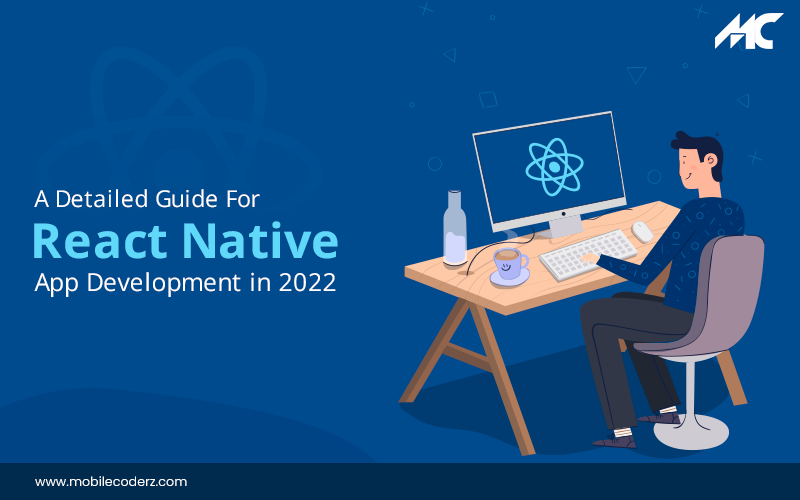 Since the beginning of time, React Native has been one of the hot topics in the world of mobile development. This is no surprise as it took the world of tech by storm with its method to create mobile applications that work on each iOS or Android simultaneously. React Native Development guide provides users with a platform that allows them to analyze memory usage and improve the efficiency of their apps.

The ability to develop apps to work with both iOS and other platforms with identical codes is the cherry on the cake. A business owner’s first step is to gain familiarity with the app developer. If the developer chooses to withdraw from the project in any way, the heart and spirit of the project will be lost.

React Native has been successful in the adoption of many businesses around the world which include Uber, Microsoft, & Facebook and is utilized across a variety of industries. Before you make the decision to take on the full-time challenge of React Native, it’s crucial to understand the way it works and then decide if it’s a most appropriate choice for your particular project.

What are its biggest advantages & its biggest disadvantages? What is its distinction with other development platforms? Then, lastly What are the things your developers have to know before embarking on this React Native Development journey?

We’ll answer these questions in this article. We will assist you in making an informed decision and decide whether React Native is ideal for your company. Follow this React Native development guide below.

What is React Native? 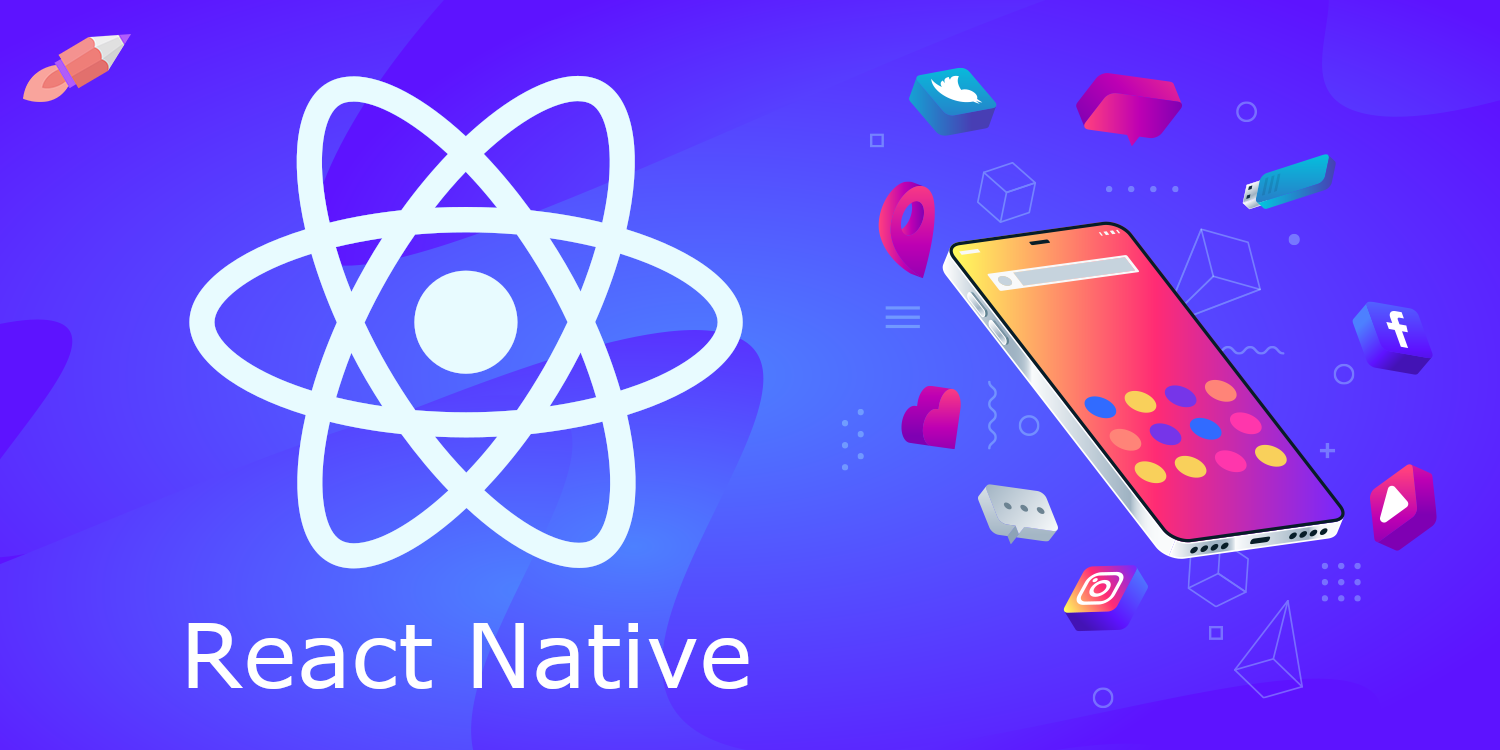 React Native is an open-source framework that helps developers build mobile apps. When it comes to choosing the appropriate framework, the majority of business owners prefer React Native. React Native development is able to provide the power to many of the most well-known mobile apps, including Instagram, Facebook, & Skype. We will explore more of these and other React Native-driven apps throughout this piece.

Many companies are choosing to develop their applications using React Native Development as a solution. The majority of their code is written in JavaScript and then shared with iOS or Android. It does not need to manage separate teams of programmers that have two different bases of code.

Also, React Native pulls in 14.51% of votes in the Stack Overflow Developer Survey 2021, placing 6th overall. With 16.48% of the votes, React Native places 5th on the list of only professional ones. 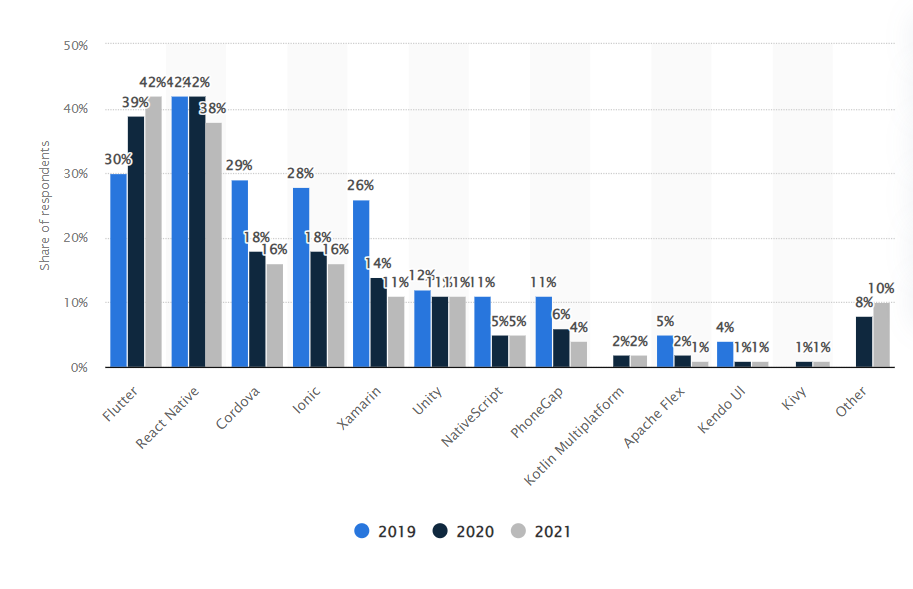 React Native Development: The History As We Know

When Facebook initially decided to launch its service via mobile devices, rather than developing a native application built on HTML5. However, the method did not stand the test of time, leaving plenty of space for performance and UI improvement. In 2012, for instance, Mark Zuckerberg admitted that “one of our biggest mistakes as a company was putting too much trust in HTML rather than native apps.”

In 2013, shortly after, Facebook developer Jordan Walke discovered something groundbreaking. By implementing JavaScript in iOS applications, he was able to create UI parts. The discovery sparked a firestorm & a Hackathon was held to explore the extent to which mobile app development could be accomplished with JavaScript solutions.

This is the way React Native Development came to life. Initial development was on iOS, but Facebook quickly added support for Android, and in 2015, the framework became publicly available.

Why is React Native Development Becoming the Basis for Businesses?

React Native is seen as the next step for mobile after React. It expands upon the React principles and allows users to develop robust mobile applications. Actually, React Native has a crucial characteristic that isn’t available in the native frames. This can be described as an important feature called the “Live Reload” feature. You can immediately observe the results of the latest modification you’ve made into your application.

Making an app that functions across two platforms requires more time than you’d expect. It’s not wise to ignore the Android & iOS users. One of the major benefits that comes with React Native is the fact that it permits faster development. Reusability is the reason this is possible. Instead of writing separate code for each platform, React Native app developers are able to quickly reuse code for parts of different OS.

You can select the app development company to cut the react native development cost. The framework is completely free and comes with no cost license. It also lets you perform an easy change of application, code reuse as well as a wide range of third-party plug-ins to lower the price of your application.

If you’re using iOS & Android, React Native Development creates a native like experience on all platforms. Users will never have to sense that their app is not performing at a high speed and this is the most important aspect of React Native. Moreover, users won’t have to worry about frequent app problems.

React native app development company costs are significantly cheaper than other frameworks with its functionality to reuse code. This allows them to save time when writing codes for the exact part on another device.

In addition, developers can also write code in the same programming language and then link it to React Native. This allows developers to add features that aren’t included in the React Native libraries. With a single codebase, React Native app developers will significantly reduce the amount of time they devote to their app and concentrate on enhancing the app for better user experience.

Additionally, developers can use suggestions from the web app and then build the test case. With such a test case, they are able to determine if the website application is simple to transform into a mobile-friendly application or not. This is a huge benefit of React Native application development for startups.

It is worth noting the fact that React Native code easily works across any platform. Even if you’re working on some specific goal, React Native helps you to reach all users in the same amount of time. It is not necessary to worry about timing as React Native will always keep it as low as possible.

A JavaScript platform, React Native, allows a developer to contribute their expertise to the development of the framework. If any developer encounters problems while creating an application, they may turn to the community for assistance. As of mid-2021, there were more than 59k active contributors to the React Native tag in Stack Overflow. There’s always someone to assist people in solving their problems and this can also have an effect on improving the programming skills.

With the speed at which the framework has taken over the market, the development future for React Native as a cross-platform app development platform for applications appears promising. Although it does have some drawbacks that we’ll address later in this section, the speed and ease of development make up for them.

Alongside the exciting advantages, React Native development has certain issues and difficulties. So, as an enterprise with a commercial focus, it is important to consider these and much more. For your convenience, we’ve given a few examples of the negatives from React Native. Let’s look at the following:

React Native does not support all features on these platforms. Certain modules aren’t supported, and require custom development. Other features may be incomplete or outdated, and React Native App Developers must design new features from scratch.

It is also important to note that JavaScript is well-known to be slow, despite all the benefits it offers. The main reason for the performance drop is due to the bridge that exists between JS and React Native. In 2022, React Native promises to release a new bridge update that will change the way native code interacts with JS. It will give React Native the ability to run better. Developers will also have to incorporate features such as TypeScript and Flow to their existing systems. If you have the right skills in programming, the possibility of significant optimization is there.

Uncertain about the UI

If you’re looking to incorporate animations, integrations, or many other processes that run behind the scenes within the application you’re using, React Native isn’t an ideal choice. For touchscreens with complicated gestures, designers could encounter some difficulties because both Android and iOS touchscreen systems are compatible to utilize the same API.

A Look at Some React Native Apps

Once you’ve figured out the basics of what React Native is and how it is used, it’s time to examine the apps built using it. The list below provides an overview of top React Native apps.

Facebook is among the most well-known React Native apps, and it’s not a surprise that we’re discussing it first. It was the first to introduce the programming language and is the primary force driving its growth.

Facebook is determined to bring all advantages of web development to mobile devices, including speedy iterations, and having one product development team. It is for this reason why React Native became a reality. The company utilized it to create the company’s own Ads Manager app for iOS and Android The two versions were developed by the same team of developers.

Instagram chose to incorporate React Native into its existing native app, beginning at its Push notification view, which was originally known in the form of WebView. Fortunately, it wasn’t required to develop the navigation system since the UI was easy enough to function without one. React Native was a great choice for developers. React Native allowed product teams to boost the speed of development for developers by 88-95 percent.

One of the best React Native Development mobile apps is Skype. In the year 2017, Skype announced that it would be launching a new app based upon React Native. There was a lot of enthusiasm from its users because the old version had a few problems.

The app has been completely revamped starting with the icons and ending with the messaging interface which now has three sections for conversations that include chat, find and capture. Microsoft, the owner of Skype, has decided to implement React Native not only in the mobile application but as well on its desktop counterpart.

React Native Development offers an excellent level of productivity and is very easy to install. React Native is a fantastic tool to create UIs on the internet and its components are the perfect method for creating your user interface in relation to specific information. Thus, the business should first define the goals of their business. Then, it’s time to begin React Native development.

MobileCoderz is a top mobile app development company  with outstanding expertise. We, at MobileCoderz, believe that each small-sized business should have the opportunity to benefit from the technological age in which we live to increase access, market digital applications and web services, compete on the internet with the big guys and enjoy constant growth and expansion.

We believe that this is achievable by offering digital products and services of exceptionally high-quality. By partnering with us, you will be equipped with the best expertise to be competitive & become an ultimate winner. With our React Native app developers, your business idea will be fully supported with outstanding technical skills and apps delivered on time.

A 5-Point Checklist of Product Pricing Strategies for Mobile App
How to Develop App for Travel Industries?
How Useful is Machine Learning In Blockchain & Cryptocurrency?
Angular 8.0: Summary of Upgraded Features & New Add-Ons.