SwiftUI or Storyboards – Is Swift UI the replacement of Storyboard? 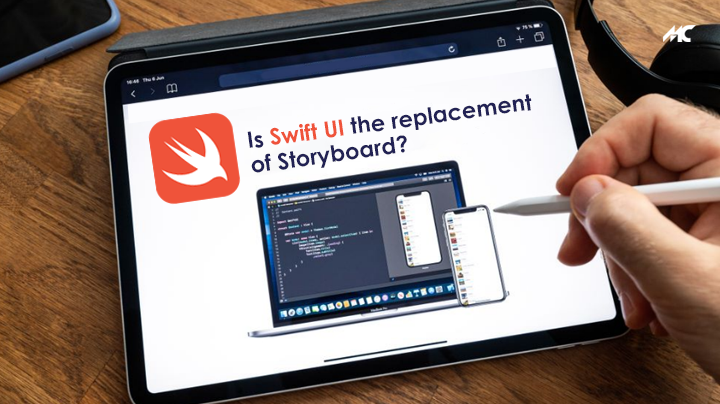 Today, we will talk about the Storyboard and latest technology Swift UI that has been launched by Apple recently. Let’s talk about SwiftUI or Storyboards.

Ever wondered why all of a sudden there is a drastic change in the design pattern of Apple software development? Even though most of us are familiar with the pros and cons of the storyboard design pattern, there are some things that you need to know at first to understand the evolving differences in its usability.

While developing the iOS or Mac application, the first thing comes into mind is whether to use Storyboard or no Storyboard? Most of the newbies or developers with lesser years of experience often use Storyboard for UI Designing but as the app size grows, it becomes difficult to manage the UI design with an increasing number of views.

The problem arises the moment when you’re working on a project with multiple developers as you have to merge codes across the server. Storyboard original code is a set of complex XML file which is too complex to understand. That’s a major drawback of using a Storyboard and for avoiding such problems you have to divide your project into a small independent module. This concept is termed as “Less Coupling and more Cohesion” in a language of Software Engineering.

Also Read:
Ruby On Rails vs Django, Which Contender Dominates The Battle?

Even though if developers start learning the technique of making multiple storyboards to avoid such problems, working with multiple storyboards won’t help as merging the codes on GiT will result in a serious time-loss while resolving unnecessary conflict. Moreover, storyboard is less of the reusable entity.

Here is a sample code for UI Design through code

You must be judging yourself as creating such kind of codes demands expertise. Also, you have to compile the whole source code even for small changes and this eventually elongates the timeline for development.

Also Read:
JavaScript vs Dart: A Quick Comparison To Choose Dominating One

2.The development process is slow as you have to work with heavy codes.

NO Storyboard [Programmatically design the UI]

Performance is quite better as compared to a storyboard.

To eliminate such problems, Apple has introduced Swift UI.

Here you can see that some lines of code can do more of the work.

There are always some advantages and disadvantages of new technology and now we are going to figure out them.

In my opinion, Apple brought major changes in its development technique which is quite surprising for the majority of developers at first but as I can see that this is a much better option rather than resolving the conflict on a server and handling a larger bunch of codes.

This blog has been written by Vijay Singh Raghav, a senior iOS developer at MobileCoderz Technologies. His hardcore passion for technology & innovation keeps inspiring him to create such a thought-provoking content for tech lovers.