Infrastructure as Code: Top Benefits and Tools for DevOps Teams 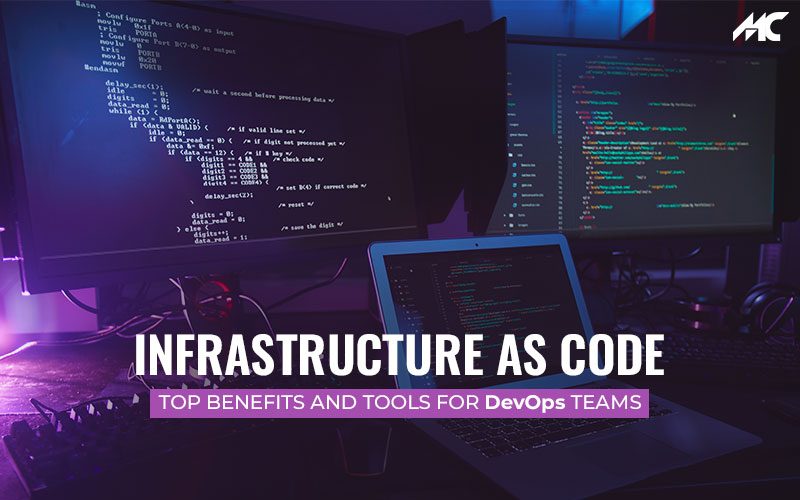 Infrastructure as Code is a boon for DevOps teams and developers. It enables them to provision IT environment with multiple lines of code. Unlike traditional infrastructure setups which take hours or even days to configure due to manual processing, with an IaC system you can do it in minutes.

Infrastructure as Code is among the most crucial DevOps practices used with continuous delivery. This IT technique gives many advantages to businesses. Infrastructure as Code empowers DevOps teams to utilize different tools and techniques to automatically control and customize the needed infrastructure rather than the manual configuration of the server and operating system.

What is Infrastructure as Code?

Infrastructure as Code (IaC) is the process of managing, provisioning, and configuring an IT environment through code instead of manual setup that requires hardware devices and operating systems. Infrastructure as Code assists in DevOps for managing IT infrastructure. It offers automation features that allow DevOps teams to rapidly develop the required cloud setting to test and run their application or software. 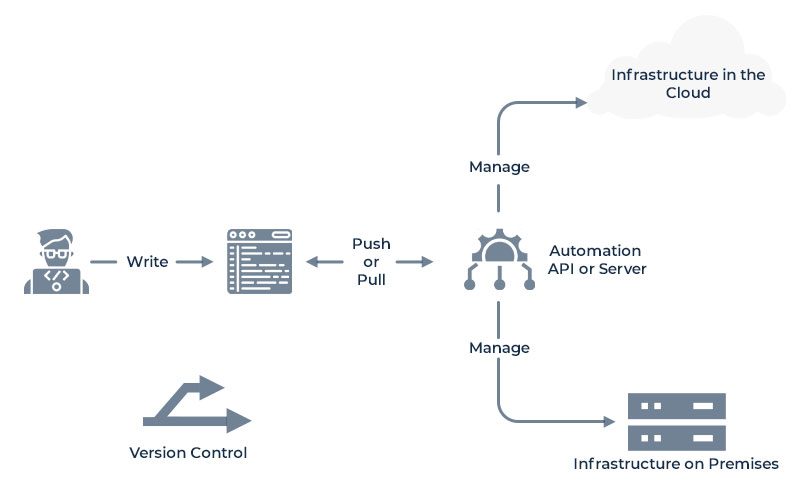 To put it in simple words, IaC is a set of tools designed to create different systems with easy configuration. It solves various problems associated with inconsistent IT environments that include networks, virtual machines, load balancers, and connection topology.

Since it provides cloud computing through code instead of manual processing, it eliminates human involvement in the process of setting up servers and virtual machines via an automated process.

Also Read:  Next.Js Framework: The Next Big Thing of 2022

How Many Ways Developers Can Write Infrastructure as Code?

There are mainly two methods for writing Infrastructure as Code:

Declarative (Functional): The declarative approach means to write or define the required or desired state of the target. In this method, developers define what are the requirements or tools needed to set up the server or infrastructure. They don’t need to define the steps to setup the server.

Imperative (Procedural): In this approach, the commands which are required to achieve the desired outcome are defined. The imperative method focuses on how the infrastructure could be customized to get the desired result.

How Does Infrastructure as Code Work?

Infrastructure as Code is based on automation functionality that makes it possible to manage and provision cloud or server with code. It doesn’t ask users to config the environment all the time. They can easily and quickly create, test and deploy software with code files.

DevOps teams and software developers can code the configuration files which are stored in the version control. If anyone makes changes in the file, they can ensure whether the changes are correct and review workflows. 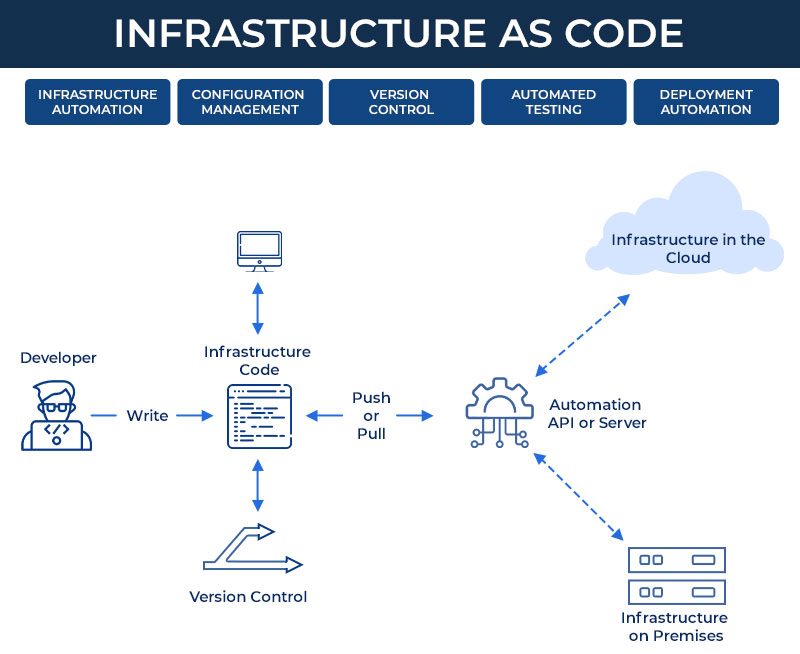 To create an IaC environment-

What Problems Does Infrastructure as Code (IaC) Solve?

The core function of an Infrastructure as Code system is to automate the IT management process. And therefore, it solves the following major problems faced in the conventional software development process:

Continuous testing in DevOps is an important task to achieve the better quality of the product. But, due to manual processes involved in continuous testing creates scope for human errors. And this is where an IaC system plays a significant role. It enables the DevOps teams to execute the automation in the testing environment. IaC makes all types of tests faster and smoother.

Manual setup usually costs a high price. You need dedicated software engineers or developers to set up the hardware and software which increases the costs of overall management. With IaC, you can create an environment of pre-defined tools which you specifically require and use whenever it is needed. Hence, you save time and money.

In the manual setup of the infrastructure, engineers first have to exert a lot of effort on the server. Then the developer team can begin to work to achieve the requirements of the OS and the hosted software. As a result, this process takes a huge time and enhances the probability of human error. IaC here decreases the installation time and human error possibility by automating the installation process.

Most businesses face a common challenge in updating their software products with modern requirements. Besides this, managing the infrastructure environment makes it time and money consuming for SaaS, cloud, and IT companies.

Therefore, companies need a better solution that helps them keep their product up-to-date with the latest user requirements. For this, Infrastructure as Code enables the companies to reduce the number of software engineers and hardware maintenance technicians. They can improve the speed of software development and update the product easily and quickly.

Inconsistencies in IT Environment

Manual method of configurations creates inconsistency in the IT management practice. In due course of time, it gets even more arduous to regenerate the same environment. These inconsistencies sometimes cause critical differences and quality gaps among the software development team, DevOps engineers, and QA. Thus, it causes issues in the deployment stage. But IaC provides consistency in the IT management practices with automation capability and leaves no room for any sort of human error.

What Role Does an Infrastructure as Code Play in DevOps?

Infrastructure as Code in DevOps plays an important role. It enables DevOps teams to improve their testing, managing, provisioning and setting up their IT Infrastructure with automation features. In most software development practices, Agile is usually common which can be used when there is a readily available IT infrastructure that allows the run and test the code.

IaC here helps in DevOps in all aspects of IT infrastructure management. Developers can make servers, deploy operating systems, networks, application configurations, set up data and component integrations. DevOps engineers can integrate IaC tools with CI/CD tools. So if you ask why do DevOps need infrastructure as code tools, below are the key reasons

Benefits of Infrastructure as Code

Now, let’s take a look at some of the major benefits that a company can leverage by using Infrastructure as Code tool in DevOps lifecycle. 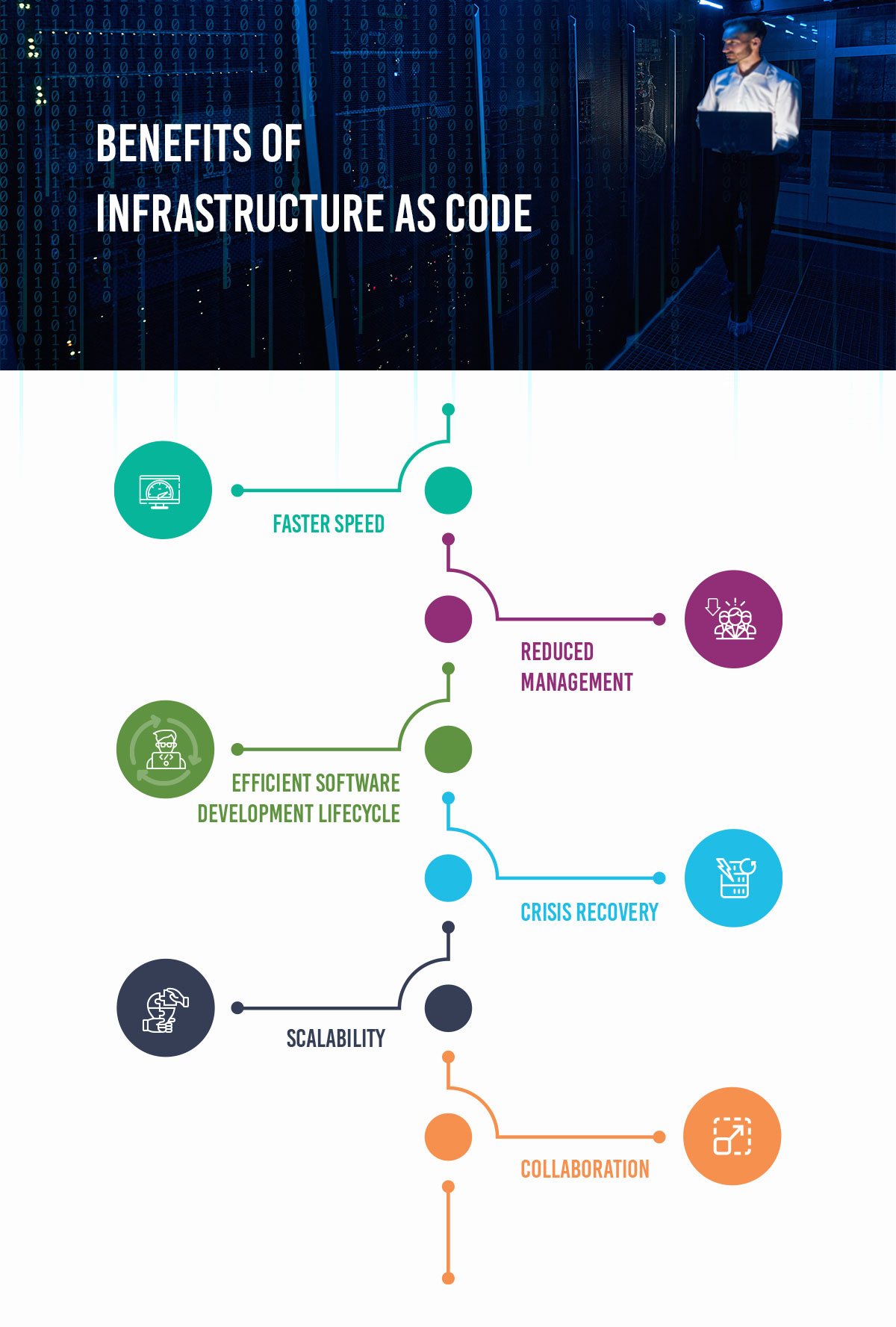 The prime benefit of using IaC tools in DevOps is that it makes the process faster. It eliminates the manual processes and the inconsistencies involved in the software development process. Infrastructure as a Code gives the capability to developers to skip the manual practices associated with the IT administration. As a result, DevOps teams can rapidly execute the changes while maintaining the same version of the application or software.

In today’s competitive software-driven world, business organizations and enterprises have to deploy many applications and IT resources to consistently maintain their IT environment in good condition. The current organization needs solutions to effectively manage its Infrastructure and reduce costs. Infrastructure as Code tools remove these problems and give better-automated control to infrastructure management.

Infrastructure as Code tools gives power and control directly to the DevOps and developers. With IaC deployment, they only need to write the code once and use it many times. Hence, it saves significant time and effort involved in keeping and maintaining the software development lifecycle. With IaC tools, developers can focus on the most productive aspect of application development.

IaC tools empower the application development team with enhanced features to recover their large systems in the event of a cyber crisis. You can simply re-run the same manifest and get the system online at a different location whenever needed.

IaC gives the benefit of version control which allows many users to collaborate in the same environment. Developers can work on different infrastructure sections and make changes in a controlled manner.

Scalability is important in managing the IT infrastructure because it helps organizations measure their potential gaps and improvement chances. And IaC tools make it easier for developers to add resources to the existing system and upgrade with user demands.

Terraform is one of the most famous Infrastructures as a Code tools. This is an open-source tool based on declarative approach. It follows a pre-implementation check to get the defined state or result. Terraform is compatible with various cloud services like AWS, Google Cloud, Azure, and OpenStack. It primarily focuses on developing services and resources that you may need for popular third-party integrations.

DevOps teams can use Terraform to describe their infrastructure as a code and make execution plans to outline what exactly happens while then running the code. This tool is cloud-agnostic and allows developers to automate the various infrastructures at the same time.

AWS CloudFormation is a kind of configuration tool by which developers write code for their Infrastructure and automate their deployments. With this IaC tool, software developers can preview the changes into their AWS Infrastructure and check they affect their existing system. It is also a declarative solution and gives major benefits to organizations that use AWS in their IT systems.

Chef is yet another popular infrastructure as a code tool. Companies use Chef as the configuration management tool in DevOps for continuous delivery and integration processes. By using its “Cookbooks”, developers can define several steps through which your IT admin team can configure a new system to the desired state.

Ansible is an IT automation engine built by RedHat which enables end-users to model the infrastructure by defining how the components and systems relate to each other. You can use this tool for CD pipelines design, config management, service orchestration, cloud provisioning, etc. Ansible improves the development process by automating the repetitive and complex tasks involved during the installation and set up of multiple servers.

Infrastructure as Code offers a set of highly useful tools to speed up DevOps with automation capability. It helps developers and DevOps teams to ensure the final product is flawless and deployed to several servers. With Infrastructure as Code tools, the software development team can update any issue in the application and maintain a seamless IT infrastructure.

MobileCoderz being a premier software development company can assist you in upgrading your IT environment with the latest IaC tools and practices. We can build a robust and faster Infrastructure as Code that streamlines your business and IT operations.

Book a Call and Speak with our Engineers Now