How Immersive Technology Like AR/VR Will Mark The New Pace in The Market? 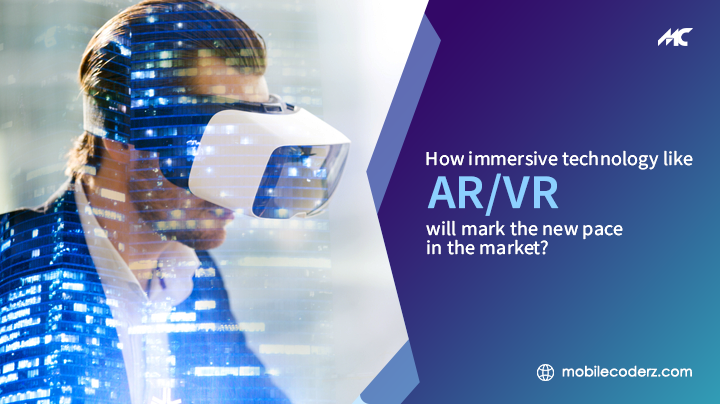 The ongoing pandemic situation has detonated the utilization of social media and expanded traffic in internet shopping platforms. It has compelled numerous A-listers (brands) to embody emerging technologies like (AR) and (VR) to engage with their valuable clients. They are also using this technology to remain competitive in the market.

The Augmented Reality is not at all a new concept in the marketing and retail industry. However, this technology is now more innovative and mature (in terms of advancement). Currently, according to the transformation in the digital world and the behavior of the consumer, the adoption of this tool has accelerated. ABI Research shared, by the year 2025, the market of the Augmented Reality is estimated to surpass US$12 billion in marketing, retail, and commerce.

Not many believed that this technological innovation could make such a huge difference. However, during the lockdown, the perception of the individuals changed. The conferences were held on the hybrid model using superlative features like live opinion polls, noise cancellation, etc. There have been numerous organization like Spatial that re-invented video conferencing using VR technology. This company not only build a virtual office set up but also enhanced productivity.

And then the major push came by Facebook. The Verge reported that every fifth of employees at Facebook are working on Augmented Reality and Virtual Reality. It is also believed that the new AR glasses by Facebook will drive the market in a rage. Last year, Reliance Jio launched a low-cost Virtual Reality device (which is believed to transform the education and shopping market).

What is its significance for the Marketers?

Pranay Agarwal, Co-founder and Chief Operating Officer at MobileCoderz shares, as we see the patterns shared in ABI’s new report, it is very much clear that there would be new formats in the retailing sector. One should also expect to see an expansion in virtual saleable products. He further adds, Augmented Reality  and Virtual Reality has already proven that it can benefit both retailers as well as consumers, particularly in times of pandemic situation. Hence, it is the ideal opportunity for retail pioneers and marketers to reevaluate the retailing and sling this vivid journey of the customer into what’s to come.

MobileCoderz is a leading web and Mobile App Development Company. We are the global leaders who have rendered web and mobile app development services for start-ups, SMEs and leading enterprises. Our strategic guidance and actionable intelligence plan for mobile development using comprehensive technologies such as AR and VR have helped many companies to earn great ROI. We have empowered them to stay ahead in the market and among their competitors. Learn how the team at MobileCoderz makes an impact using this AR & VR technology.

The blog post has been published by Arushi Meena a Technical Enthusiast at MobileCoderz Technologies. Her exceptional proficiency in App & Web technology consistently inspires her to share knowledge & opinions on the trending topics!

2 responses to “How Immersive Technology Like AR/VR Will Mark The New Pace in The Market?”