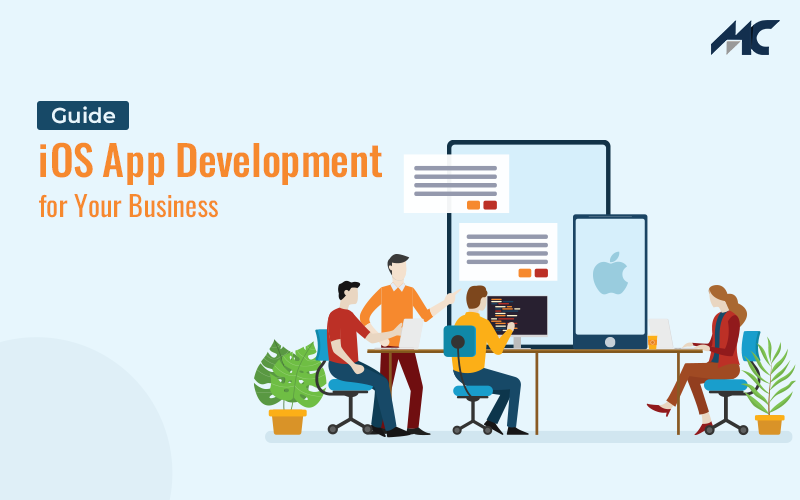 The global web traffic from mobile devices has already surpassed the traffic from other traditional devices. Two platforms, Android and iOS are dominating the global market with over 99% market share. Android might be the leading platform in terms of the sheer number of users. However, iOS is a more premium platform that gives better ROI to businesses. Now, if you are curious to capitalize on this growing market then this iOS App Development  Guide is the perfect for you.

What is iOS App Development?

iOS app development is the process of building mobile applications for iOS powered devices like the iPhone, iPad, and iPod. Special languages such as Swift and Objective-C are used to develop iOS applications, which are then deployed on the Apple AppStore

Potential Customers of iOS and How Big is the Market?

Android might have a significantly greater global market share. However, Apple still dominates the market in terms of customer expenditure. In the United States, Apple has a market share of over 58% of the country’s mobile operating system market. Thus, you must consider the geographical location and demographic characteristics of your target market while choosing the platform.

Considering the chart given above, Android is ideal for emerging market audiences, while iOS is ideal for a wealthy young audience in western countries.

The global spending on Apple and Android app stores shows that the iOS users have spent $72.3 billion on digital purchases, compared to merely $38.6 billion by Android users. iOS is leading in the mobile commerce industry with around 23% engagement, while Android only has 17% engagement.

Why Should You Consider Developing an iOS Application for Your Business?

The majority of the western world is using iOS devices as their daily devices. This could give you access to high-wealth demographics to expect improved ROI. Apart from this, there are many advantages of developing applications for iOS;

Smartphone users usually uninstall applications due to a bad experience. This is not the case with Apple’s iOS devices because of the flawless hardware and software features. Unlike other smartphone OSes, iOS devices provide a uniform experience throughout the iPhone lineup. This means a lot to people who want a smooth and uniform user experience.

iOS devices are powered by superior hardware and high-performance technologies. These apps are considered some of the fastest and most innovative mobile applications available on the market. The great hardware, customer support, and world-class software can help you create a well-optimized application that performs well on all iOS devices.

The simplicity of the platform enables faster development of iOS applications as compared to other operating systems. iOS makes it easier, faster, and affordable to develop applications. Plus, Swift and Objective-C help in developing powerful applications in less time. Usually, it takes 30-40% less time than android application development. iOS applications are programmed with faster and simpler codes that result in a more cost-effective approach to mobile app development.

Apple has always touted iOS to be the most secure platform on the smartphone market. The operating system has a strong reputation for being a leader in security with its robust infrastructure. This assurance is really important considering the growing cybercrime around the world. Therefore, developing iOS apps for your users gives them assurance of security and protection from cyber threats.

If you consult any leading mobile application development company, you’ll learn that iOS applications are considered some of the most innovative applications. They consist of some of the most cutting-edge tools and technologies that help businesses to express their creativity and uniqueness. You radically transform your business process with iOS App Development to meet customer demands.

As discussed before, iOS application can guarantee you better ROI for your business. Apple users are more likely to pay for a product or service than regular Android users. This healthy finance scope can let you earn more from a wealthy customer base through iOS App Development.

Apple has a limited number of iPhones in the market with limited iOS versions. However, the Android device market is very fragmented with tons of devices from different manufacturers with different versions of the Android OS. This could increase the mobile app development time and cost for an Android application. Whereas, it becomes much easier to create apps of iOS with a lower time to release.

The iOS consumer has always been more loyal, this could be the major contributing factor to your business growth. The target audience is much easier to identify with iOS applications.

Approach of the iOS App Development

Before you start building your iOS application, you must determine the programming language for iOS App Development. Programming languages are not equal to each other and each of them is ideal for a particular use case.

Native Applications are meant to provide a native and exclusive experience to the users. These applications cannot run in a web browser like websites or web apps. Users can download these platform-specific applications from dedicated app stores like the Apple App Store. Developing your own native application in the iOS App Development would require a specific set of skills and technologies than developing traditional websites.

The native applications provide a more refined and polished user experience than ordinary applications or websites. However, a native application won’t be compatible with other platforms to reach a wider audience. This approach to mobile app development requires technologies such as Java, Swift, Kotlin, Objective-C +, etc.

Cross-platform applications are able to run across multiple platforms. This approach will help you take the best advantage of platform-independent technologies like HTML and CSS to deliver effective mobile applications at a lower development cost.

Hybrid apps are platform-independent applications that can run on multiple operating systems such as Android, iOS, Windows, Macintosh, etc. The Hybrid app developers need to write a single code once that could run almost anywhere. Thus, a single line of code is effective for all platforms in Hybrid App Development.

The smooth interaction between the native platform and web experience is ensured by advanced tools. This makes it possible to compile and convert hybrid mobile applications into native applications in the iOS App Development process.

The team size required for your iOS App Development will depend on the development approach that you have taken. Usually, native app development takes a larger team and eats up more resources than the other approaches. In any case, your hired team of software engineers must consist of mobile developers, backend developers, DevOps specialists, Designers, and QA Specialists. The core team developing the application must have expertise with the Swift programming language, Apple’s Xcode IDE, design guidelines, UI and UX, Apple human interface guidelines, networking, grand central dispatch, and more.

The average cost of iOS App Development is around $5000 to $50,000. However, the cost could be further broken down into 3 segments; small, medium, and enterprise-level applications. You should also consider the pay rate of iOS app developers.

Factors that Affect the Cost of iOS App Development

There are various metrics that define the cost of iOS App Development.

This stage discusses the problem that the mobile application will solve, the target audience, features, and market niche. All the requirements are discussed in the stage that needs to be implemented in the iOS App Development process.

In this critical stage, the mobile app development team starts developing the application based on an existing design. After the development, the QA team works on the rigorous testing of the application to ensure that the experience is flawless and bug-free.

Once the application gets approval from the QA (Quality Control) team, it can be launched in the Apple App Store. However, the mobile app development process does not finish here, as, after the launch, an application might require constant changes, maintenance, and frequent updates according to the changing customer requirements. Thus, the development team is always working in the background to refine the experience.

Developing your own iOS application might be challenging in the super-competitive market. Thus, collaborating with MobileCoderz, a top iOS App Development Company could help you achieve your business goals and capture the iOS market with world-class Mobile App Development. We develop end-to-end and fully customized mobile applications that provide a uniform, high-performance, stunning, secure, and reliable user experience. We take the extra mile when it comes to driving innovation through our iOS App Development services. Our skilled iOS app developers have the expertise to adapt the future-ready technologies of Web3.0

FinTech App Finku Developed by MobileCoderz is Now a Part of Y Combinator W22 Batch
Top 5 Mobile App Development Ideas To Counter The Impact Of COVID-19
How Much Does App Development Will Cost in 2020? Let’s Peep into the Future
How Useful is Machine Learning In Blockchain & Cryptocurrency?