What is Blockchain? Explained – Everything You Need To Know About Blockchain 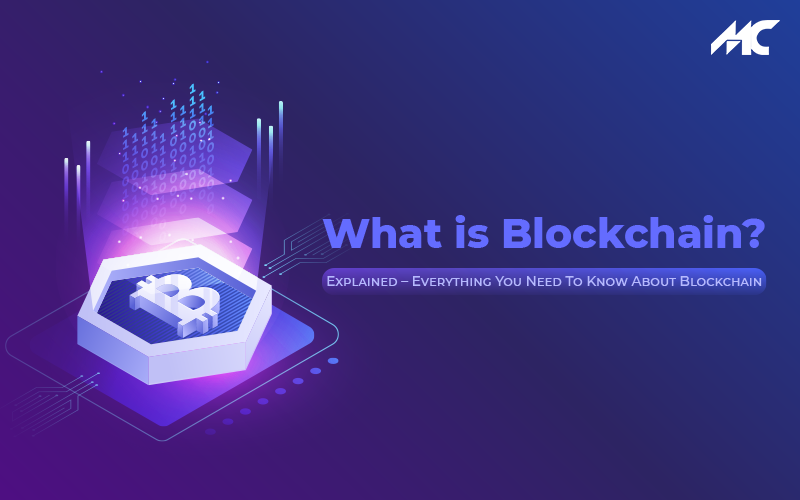 “The blockchain is an incorruptible digital ledger of economic transactions that can be programmed to record not just financial transactions but virtually everything of value.” – Don & Alex Tapscott, authors Blockchain Revolution (2016).

Blockchain is a new and intuitive way to implement decentralization. In simple words, the concept of blockchain technology is based on a time-stamped series of immutable records of data that are managed and authenticated by a cluster of computers, not by a single centralized entity. For this, cryptographic principles are used to secure and bound blocks with each other.

Blockchain brings a decentralized way to maintain the ledger which is practically impossible to falsify. Moreover, it is a system of keeping records without any indulgence of a central authority. The prominent feature of this technology is that once data is inserted in blockchain, it is almost impossible to change it.

Blockchain is a shared ledger with many pages of records. Each page begins with a sort of summary on a page before it. So, if you change the record of the previous page, you also have to change summary on the current page. Since this technology does not require third-party intermediaries like bank or government to transact money, property, contracts, etc., blockchain development is on everyone’s mind.

A block can be defined as a chain of blocks that contains some information and type of data that only depends on the type of blockchain. The first block in a blockchain is called “Genesis Block”. Each block has a unique hash that can read fingerprints to identify each block and all of its content. So, any change in the block itself will cause the hash to change. In this way, block hash is very important to detect the changes in intersections. If there is any change in block hash, this can’t be considered as the same block. Each block comprises:

Assuming if someone wants to tamper the information stored in block 2, a hash of block 2 will also be changed and block 3 won’t have the new hash code of block 2. As per this proof of work, tampered block 2 will be considered as an invalid block.

We need to understand the core components of this technology to progress the implementation of a block.

Also Read:
Ethereum 2.0: An Overview To Uncover Its Future

Distributed P2P network: Blockchain works on a peer to peer network with an IP protocol. There is no centralized node and all the nodes will equally use all the services alongside collaborating with a consensus algorithm. P2P networks are generally more secure because they do not have a single point of attack or failure as in case of a centralized network. P2P network is a foundation of the decentralized nature of it.

Consensus Algorithm: Consensus algorithm synchronizes the copies of blocks scattered across the nodes. Irrespective of the type of local copies, its mechanism ensures that they remain updated and in sync with each other. All the nodes are identical and possess the same amount of information. Some of the consensus algorithms are discussed below:

Blockchain technology was introduced to us by “Satoshi Nakamoto” who is a genius and founder of Bitcoin i.e a peer-to-peer cash system. Bitcoin is a common example of a decentralized, peer-to-peer digital cash system built on it. Moreover, it is the first generation of this technology that only involves such forms of digital cash.

The blockchain 2 was introduced by a young “VitalikButerin”, who founded “Ethereum Network” and is considered as a second revolution in the blockchain world. Blockchain Smart Contracts which are defined as the autonomous codes within the same technology are capable of executing tasks itself based on different conditions.

The decentralized Application system can be considered as the third generation of blockchain running on decentralized peer-to-peer networks. It works on the decentralized network as well as decentralized storage. Similar to traditional applications, Dapps can also have a frontend written in any language with the ability to make calls to its backend.

Blockchain technology is not just a technique but a concept that includes deep mathematical foundations and calculations. A tremendous amount of development took place in the last decade since the date modern block chain has been evolved. Soon, we expect to see some innovation in this technology with improved performance and scalability and it will be quite challenging specifically for those involved in blockchain development. Next Step of technology depends upon its strengths, its limitations, & key factors to determine that how we need to create different architectures based on the business needs. However, the world believes that block chain and crypto both are the future of technologies and their mass adoption is predetermined.

Figma vs Adobe XD | Which UX Design Tool is Better in 2022
Top 5 Mobile App Development Ideas To Counter The Impact Of COVID-19
How to Hire a Right Mobile App Developer for your Business?
A Powerful Combination Of The Future When AI Meets IoT: AIIOT