How To Convert An iOS App To Android App? (Steps + Challenges + Cost) 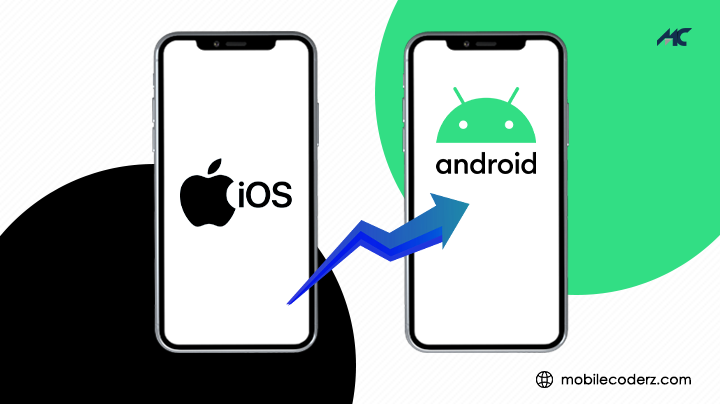 Conversion of an iOS app to its android counterpart could be an ideal brainchild for any brand to extend its digital outreach from iOS to Android-based devices. The noteworthy point here is an android platform poses lucrative opportunities for brands, given its uncontested dominance by 80% over an entire OS marketplace. Therefore, the said conversion would mean an expansion of your brand’s digital outreach to reinforce its exposure to a wider audience base.

Believe it or not, the android platform gives a breathless contest to an iOS platform. To a certain extent, the competitive edge of android over iOS is astonishingly pols apart, as differentiated in the following pictorial guide – 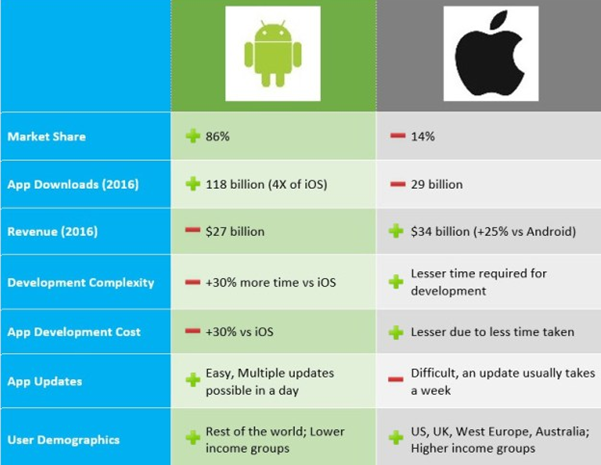 Converting An iOS App To Android App: Prior Considerations

As the commercial viability of converting an iOS app to its Android counterpart is already explained, now the focus shifts to the question of what the conversion would involve. Will you resort to a default mechanism like a conversion tool or any specific end-to-end project management tactic?

Your idealized android app should at least stand compatible with the minimum requirements regarding an Android version.

For instance, if you want to achieve a coverage of nearly 90.5% of our mobile devices, the ideal setting should be set at 4.4 KitKat (and newer). However, it doesn’t preclude version-related incompatibility in future in specific case scenario. Therefore, we recommend hiring an analyst to address probabilities concerning app features, target audience and others.

The architecture and features of the android app should undergo a review process to spot compatibility issues. The necessity of this step is accentuated with the fact that both iOS and Android platforms have their respective differences and peculiarities.

To counterbalance the shortcomings, certain platform properties can either be tweaked or an app must have brand new functions, as discussed below –

Both iOS and android designs have their respective pros and cons, considering both of them are two different environments. It calls for a careful approach to see if the design elements of the iOS app should not be ported to the android app in its replica. It will definitely create compatibility issues as both the platforms carry design-wise differences.

When converting an iOS app to an android app, the programmers must ensure whether the external tools and libraries they use for developing the mobile app stand compatible with the android platform. If there comes a situation when incompatibility is detected, the programmers should take resort to a framework as an alternative solution.

A technical snag called dissemblance may arise during the process of code porting for iOS/Android conversion. The meaning of this is that you can’t use the code of Swift language that is used to develop an iPhone today in developing android apps, which are mostly based on Java/Kotlin. Though it may sound a hypothetical problem, considering the intricacy of iOS app conversion to its android counterpart, every step warrants meticulous consideration.

The catch here is C-code can be ported in a certain scenario to android platforms, as it works well on both platforms. The main thing to understand here is, a programming language suitable for the iOS platform can be substituted for android counterpart.

The conversion process involves an entirely different and new programming language rewritten in the app based on its intricacy, architecture, and libraries, etc.

Steps To Convert An iOS App To Android App

✓ Map out your strategy

This stage of converting will require meticulous analysis on features, design, workflow and the inherent qualities of your existing iOS app. Shift your focus on the most probable case scenario that may account for certain problems warranting a strategy in place to handle them. The conceivable strategy must involve optimization of your android app version in a way that can rule out compatibility issues, such as app porting process, programming language, frameworks, and so on.

Technical snags related to code, libraries, and third-party services must require deep evaluation to ensure an early fix to compatibility issues. Make the selection of right tech stack permitting a faster and accurate app porting. Thereafter, execute the development. An experienced programmer can easily detect the similarity in the pattern of developing a single android app and converting an iOS app, in certain cases. This means the conversion process of an iOS app to its android counterpart is time-taking.

This stage of converting an iOS app to an android app involves quality assurance using emulation tools or real android devices to conduct testing. Besides, if you deem it necessary, a host of different app testing methods can be used, such as load testing, beta testing, validation testing, and so on. If the testing result yields in satisfaction, submit your new android app to Google Play Store. Now you can market your app to a wider customers’ base.

What Is The Estimated Deadline Behind Converting An iOS App To An Android App?

No exact detail can be furnished to state the accurate deadline behind finishing the conversion of iOS to android platform. However, the approximate duration of 1 to 6 months can be said a possible deadline for the task, subject to considerations, such as intricacy, features, frameworks, and design.

What Is The Estimated Cost Of Converting iOS To An Android App?

The estimated cost for the said conversion could be anything from $6000 to $20000, depending on a host of factors, including features and app types.

What Are The Challenges While Converting iOS App To An Android App?

The said conversion is not a piece of cake. Certain challenges that may appear during the process of conversion are –

Therefore, for developers, combining all quality-parameters is quite a herculean task.

How Much Should It Cost to Hire Mobile App Developers?
Why Consider Machine Learning in Your Mobile App Development Process?
iPhone 11 Launch: Highlights of the Most-awaited Apple Event In 2019
Angular 8.0: Summary of Upgraded Features & New Add-Ons.

One response to “How To Convert An iOS App To Android App? (Steps + Challenges + Cost)”