Reasons to Choose Progressive Web App for Your eCommerce Business 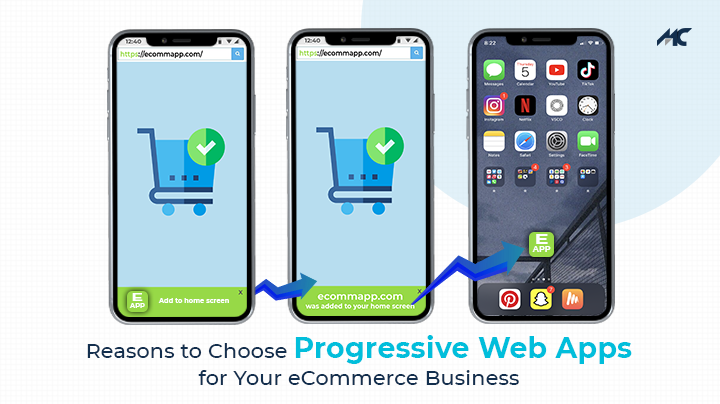 The unmistakable presence of smartphones in the contemporary life of humans today is endorsing the prediction of Statista which revealed that the estimated rate of cellphone’s penetration, on global scale, would be around 45% in 2021. The finding leads to the conclusion that almost half of the population of the world will experience the phenomenal surge of smartphones in their lives. The statistical revelation by Statista also lends the gravity of importance on apps and their expected exposure to the massive population of smartphones-users from around the world. No doubt, the future trend is envisaged as a precursor to the phenomenal rise of brands adopting eCommerce tactics to turbocharge the profitable growth of their business.

Among various apps seen as a precursor to the profitable growth of brands using eCommerce apps for their business, the one called Progressive Web App (PWA) affords a promising and galvanizing potentiality for the eCommerce business brands. Even though the presence of Progressive Web Application is narrowed to limited human population exemplifying its nascence, the extensive capabilities of progressive web apps are said to be cutting-edge prompting companies to capitalize on them to foster immersive user experience and generate boosted engagement and retention rates, an indicator of profitable growth of any eCommerce business.

What Qualifies Progressive Web Apps To Be Your eCommerce Business Tool?

Progressive web application is a combined feature of a website and a mobile app that doesn’t require downloading the app from a third-party app store and go through the hectic installation process that would sometimes be tantamount to deletion of other apps in your phone to accommodate the one being installed.

On the other hand, you can download PWA straight to your phone and it can do a lot of things, such as:

How Is PWA Important For eCommerce Web Development?

The features of PWA outlined above endorse one crucial fact about the software, that it can pave the path for terrific growth of any eCommerce business brand, provided the application of the PWA follows the right business strategy. That said, PWA stands poised as a prime factor of an eCommerce web development, considering brands can experience a tremendous surge in engagement and retention rates that can later be leveraged to create a personalized recommendation of your products and services to your target customers and will ultimately result in a phenomenal surge in your business growth in terms of collective revenue generation.

According to this Infographics, progressive web apps contribute –

Reasons To Choose Progressive Web Apps For Your eCommerce Business

If you ever opt for progressive web app development services, consider it would be an appropriate business decision, in terms of saving you cost of the development. The development cost of progressive web apps is surprisingly negligible, considering it eliminates the mandatory requirement of different versions for numerous devices, as it can support the requirements of all endpoints responsible for its function. Apparently, developing PWAis considerably lower compared to native app development. And brands like MobileCoderz can offer you PWA development services at an even more affordable and reduced price point, without development cost or coding.

What would you call an app that would require you first visit its corresponding app store, download the software, install it, answer some questions, fulfill the requested access and so other parameters?

Well, if you want your target customers not to experience such a tedious process of installing an app so that your eCommerce business can flourish without their discomfort, choosing PWA is a wise decision approach. This app eliminates third-party digital distribution reservoirs which means, straightaway access to your business progressive web app, thus saving time and useless hassles for the users. Besides, the app can be added to the user’s smartphone’s home screen, it, therefore, puts the least burden on the phone’s spatial requirement for the app to operate.

This attribute of progressive web apps trumps all the virtues, considering seamless offline functionality of PWA allows users to stay connected with your eCommerce business that can be used to improve engagement and retention rates. The beauty of this feature of PWA is it permits no dependence on the compromised networks, thus allowing users to eliminate the compulsion of network connection and enjoy the app more conveniently. This feature of PWA allows retailers to prevent customer from leaving their catalogs which in turn prompts the improvement of customer retention.

With the features of being more user-friendly, offline functionality, and attractive interface, progressive web apps also bear beautiful resemblance of any native mobile app, thus offering users better engagement-experience. The blazing fast speed is another added feature of PWA allowing it to be a favorite app for users to browse products and services of your eCommerce business compared to visiting a website. Based on cutting-edge frameworks, tools and technologies embodied, progressive web apps ensure user-experience is boosted to the next level of satisfaction.

Progressive web apps with their chockfull of features endorse as to why they qualify a powerful eCommerce business tool for your e-business, in terms of boosted engagement and retention of your target customers. You happen to reap the benefit of enhanced profits and revenue generation with the deployment of PWA in your eCommerce business. Meanwhile, to ensure your business has the participation of a well-functional and intuitive progressive web app, hire our team of developers and get a PWA developed loaded with cutting-edge features

What’s New in Flutter 2.8 Upgrade?
Is Cryptocurrency Set to be Banned in India and Traders to be Penalized Soon?
Best Ever Machine Learning App Ideas of 2021 for Business
Medical Healthcare Mobile Application Development Services